- Floyd Mayweather is famous for showing-off his expensive cars

Floyd Mayweather made not less than $1 billion off his remarkable boxing career and a huge chunk of the money has been lavished on highly exotic cars.

Mayweather who retired with 50 wins (27 KOs) and 0 losses is said to have car collections in two different places, one at his Las Vegas home and the other right at his house in LA.

Both collections feature the same car models, with one the variant of the cars in white, while the other collection is black.

However it appears that the legend prefers his black cars in Las Vegas while in LA, he goes for the white rides.

There are quite a number of Rolls-Royces in his garage said to be worth around £3 million.

The 43-year-old also owns 4 Bugatti Veyrons, worth £1.7 million each, the estimated £20 million could be a lot higher.

It also takes into account his collection back in Las Vegas where he owns posh rides including Lamborghini Aventador (£275,000).

There is also a £238,000 worth Ferrari 488 but according to GiveMeSport, the exception to the rule of all the cars being white comes in the form of a Bugatti Veyron. 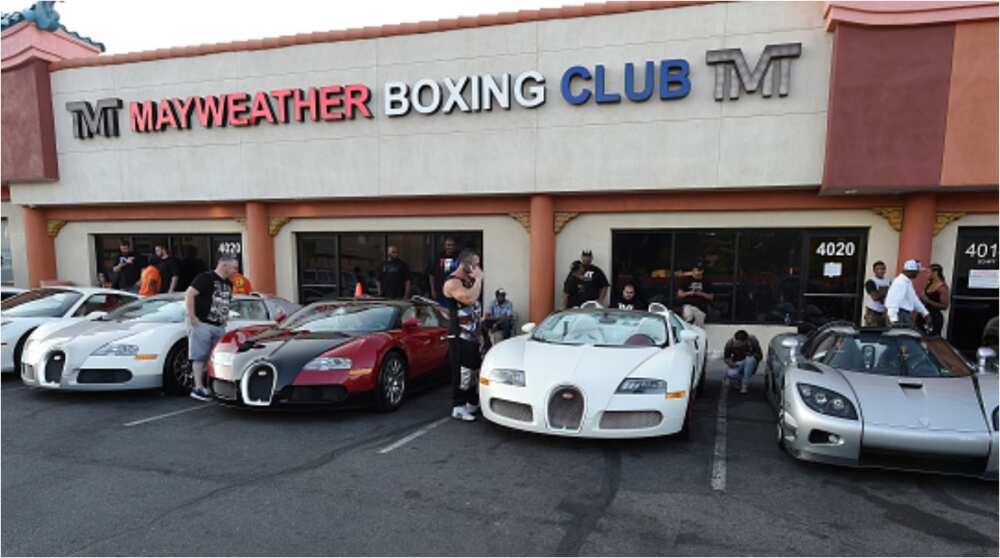 One of the Ferraris comes in a red and silver colour and the boxer has occasionally shown off wads of notes as well as the interior of his cars.

Sometimes he parks his cars in front of a private jet just to show his classic and luxurious lifestyle.

5 Rolls-Royces have been spotted in Mayweather’s Beverly Hills’ garage, in total worth over £2 million. Meanwhile, Legit.ng earlier reported that Karim Benzema is in his 11th season with Real Madrid and has won every competition at club level since he joined the club in 2009 from Lyon.

And those wins have come with lots of money in his bank account which is enough for him to acquire the good things of life.

Despite being axed from the France national team a few years back, the 32-year-old is still living a comfortable life with cars worth a staggering £3.5million parked in his garage.