- However, the second half of the match saw Fabian Balbuena find the back of the net deep into the second half before Davinson Sanchez directed the ball into his own net

Spurs came into the match in spectacular shape having stunned Man United 6-1 in their last EPL fixture played at Old Trafford.

The tie saw Son Heung-Min and Harry Kane once again picked from where they left, with Kane finding the back of the net twice in the first half against their London rivals on Sunday.

Heung-Min got his side off a flying start as he scored the opener inside the first minute of gameplay, latching on Kane's brilliant pass to fire into the far corner. Kane doubled the advantage eight minutes later, with the Englishman once again combining with Heung-Min who turned provider this time.

The England international made it 3-0 in the 16th minute, with Sergio Reguilon and Hojberg all playing a part in the build-up.

The second half of the match saw West Ham pull a dramatic comeback deep into the half, with the visitors scoring three with the help of an own goal to salvage a draw. 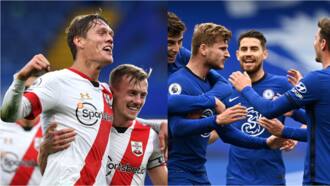 Fabian Balbuena was first to pull one back for David Moyes' men in the 82nd minute, before Davinson Sanchez directed the ball into his own net.

Substitute Manuel Lanzini went on to score at stoppage time with a fine finish to ensure both sides share the spoils.

The result saw the Lilywhites miss out on a glorious chance to move second on the Premier League charts from five matches and now sit sixth with nine points.

Two first-half goals from the 24-year-old and one from Kai Havertz would have helped the Blues claim maximum victory in the game.

However, those goals were not enough as Danny Ings, Che Adams and Jannik Vestergaard ensured the game ended in a stalemate. 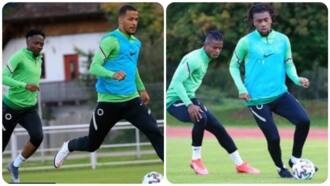