- The deputy governor of Ondo state, Agboola Ajayi, is reportedly under renewed pressure to resign

- Ajayi, after leaving the APC, had contested but lost the just concluded governorship to his boss, Governor Akeredolu

The deputy governor of Ondo state, Agboola Ajayi, is reportedly about to record another political loss after his defeat in the just concluded governorship election.

Ajayi who contested the election on the platform of the Zenith Labour Party (ZLP) lost woefully as he failed to win in any local government.

He had resigned from the All Progressives Congress (APC) in the buildup to the governorship election and eventually ended up contesting against his boss, Rotimi Akeredolu. 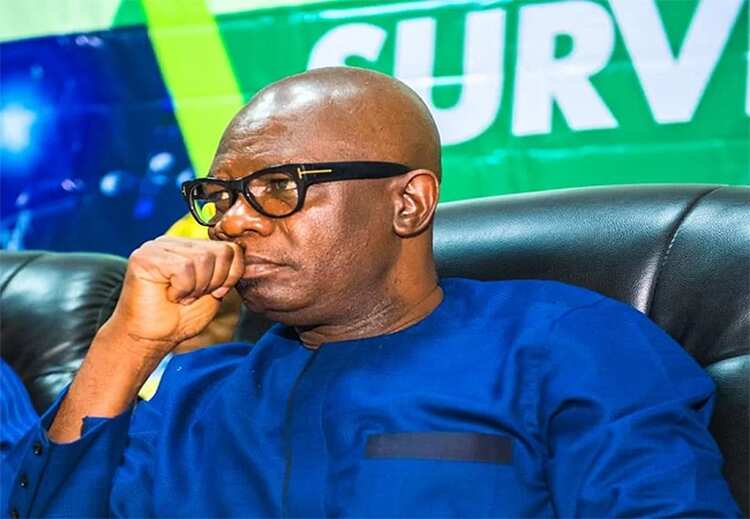 Efforts to get him impeached after resigning from the APC proved abortive before the governorship election.

However, The Nation reports that the deputy governor is now under pressure to tender his resignation or face impeachment after losing the election.

The newspaper reported that even some close allies of the deputy governor in the state House of Assembly who stood against his impeachment before the election are now asking him to resign.

The deputy governor's allies reportedly said they were urging him to resign to avoid "unnecessary impeachment brouhaha".

Some of the sources said Ajayi might turn in his letter of resignation to the Speaker of the Assembly before the end of this week.

It was gathered some key friends of Ajayi, including a northern governor, was reached to advise him accordingly to resign.

A top Ondo government official reportedly said that aggressive steps will be taken to ensure Ajayi is impeached if he fails to tender his resignation letter.

Meanwhile, Governor Akeredolu has declared his readiness to forgive his deputy, Ajayi, despite contesting against him in the just concluded governorship election.

He said he is ready to receive the deputy governor with open arms if he is remorseful.

The governor disclosed this after he met with President Muhammadu Buhari at the Presidential Villa, Abuja on Tuesday, October 13.

The ground troops of the Operation Thunder Strike (OPTS) on Friday night foiled an attempted kidnap by armed bandits of citizens plying the Kaduna-Abuja road. The

Governor, Nyesom Wike of Rivers State has vowed that nobody can rename any part of the state. The Governor said this while making veiled reference to

The Police Command in Rivers has arrested one Daniel George, suspected to be a pirate, over his alleged involvement in the attack on a passenger