Following the ongoing #EndSARS protests, the demonstration took a different turn as thousands of youths have taken over major roads in Port Harcourt causing heavy traffic in Rivers state.

The protesters who came from all the 23 local government areas in the state called for an end to police brutality while declaring their support for President Muhammadu Buhari's administration.

According to Leadership, the demonstration has caused traffic gridlock especially within Port Harcourt GRA and Port Harcourt-Aba express road. 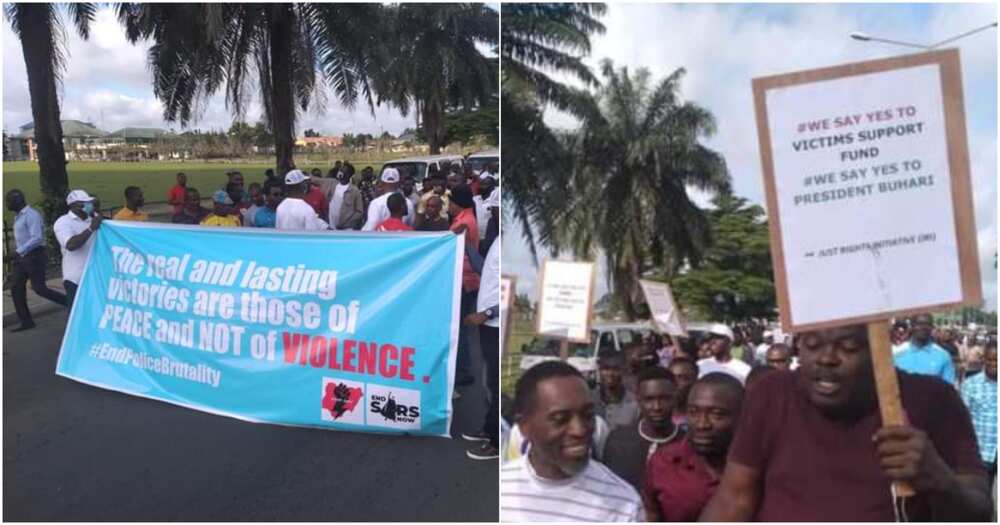 The youths carrying placards and banners with different inscriptions such as “We Say Yes To Victims Support Fund, We Say Yes To President Buhari” converged in front of the Port Harcourt Polo Club and marched through major roads and streets in the state capital.

APC caretaker chairman claims there is hidden agenda behind #EndSARS protest, reveals what leaders should do

However, Enefaa Georgewill, the spokesman of Rivers State Civil Society Organizations, one of the groups involved in the protests distanced the group from the ongoing demonstration.

Earlier, Legit.ng reported that the leadership of the National Assembly has appealed to the Nigerian youths to suspend the ongoing nationwide #EndSARS protests.

The president of the Senate, Ahmad Lawan, and the Speaker of the House of Representatives, Femi Gbajabiamila, made the appeal on Sunday, October 18, after meeting with President Muhammadu Buhari.

According to them, the protests should stop since the Nigerian government has accepted the demands listed by the youth protesters.

Lawan said the Nigerian government needs time and a conducive environment to implement what the protesters are asking for just as he gave the assurance that the National Assembly will play its required roles on the issues.

Nigerian governors list 5 things they are doing to address all #EndSARS demands, reveal what will happen if protest is not suspended