- In another pot, the singer stirred some money bills as he added a bit of salt to both 'dishes'

The social media sensation in a new video shared to his Instagram page reminded people that he is not just a regular chef.

In the video, Bandle whose dwarfism sets him apart from many people is seen stir-frying eguisi and eba in a pan. 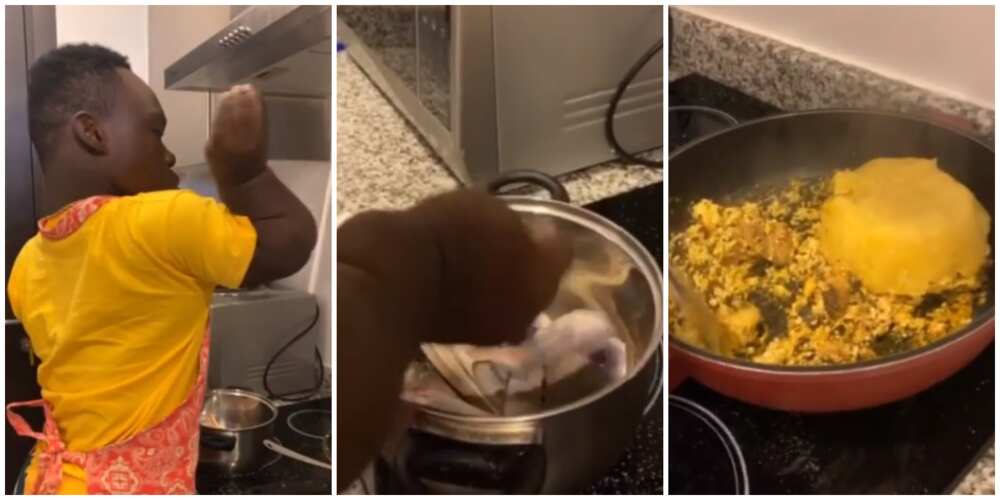 Shatta Bandle is shown in the video stirring some money bills in a pot. Photo credit: Shatta Bandle/Instagram
Source: Instagram

In another pan, he mixes some money notes which include some dollar bills.

Sharing the video, he captioned:

Bandle became an internet sensation in Ghana after a video of him claiming to be richer than the richest man in Africa, Aliko Dangote, started circulating.

He is not only popular in Ghana but in Nigeria, South Africa, Kenya and Benin Republic. His fame came after Nigerian communities posted and tweeted about him, as well as their reactions to his video.

Only some months ago, Bandle was seen doing something romantic for his girlfriend. The self-acclaimed billionaire was spotted in a video blowing his girlfriend's mind away with a beautiful gesture of love.

The "billionaire" was seen in a video using his sonorous voice to sing for his girlfriend while making a video call with her. It was gathered that Bandle started singing after his girlfriend challenged him to sing for her during the call. He accepted the challenge and sang beautifully.