The Blues will hope to get their quest to win the European championship off to a winning start after poor outings in the previous editions.

Frank Lampard's men failed to claim maximum points in their Premier League meeting against Southampton last weekend despite taking the lead a couple of times. Both teams ended up sharing the spoils at the end of the game.

However, the 42-year-old will have to throw out his best XI against the Spanish League giants for tonight's encounter.

Edouard Mendy already handed the club an injury boost after training with them earlier this week and could return to the starting line up. 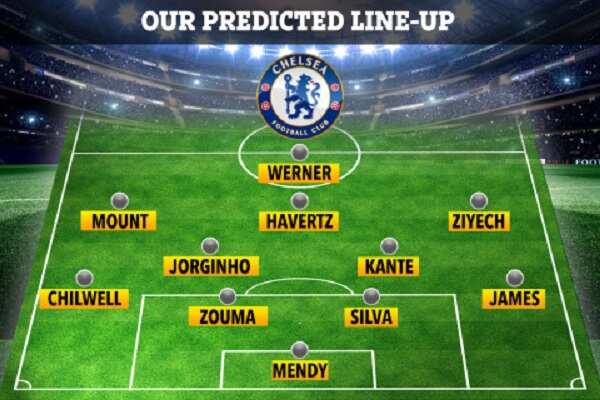 At the moment, Chelsea have no injury worries except for youngster Billy Gilmour who is not expected back until Christmas.

Reece James could bench Cesar Azpilicueta at the right-back position while legendary Thiago Silva is set to return to the starting XI despite missing the Saints 3-3 draw.

SunSport reports that Kurt Zouma will most likely partner with the former PSG defender while Fikayo Tomori and Andreas Christensen batting him for a place.

The duo of N'Golo Kane and Jorginho will maintain their positions against Sevilla and this will allow Kai Havertz to operate behind the striker in the No. 10 spot.

Hakim Ziyech is in line to make his first debut for the Blues since he joined them from Dutch side Ajax this summer.

He could take Christian Pulisic's position on the right flank and Mason Mount continuing his solid form from the left.

Timo Werner is almost certain to lead the line, with Tammy Abraham and Olivier Giroud providing a boost off the bench if needed.

Legit.ng earlier reported that Edouard Mendy has handed Chelsea an injury boost ahead of their Champions League clash against Sevilla on Tuesday, October 20.

The 28-year-old was missing in action in the Blues 3-3 draw against Southampton at Stamford Bridge last weekend.

Frank Lampard's men squandered their leadership three times in the meeting as they shared the spoils at the end of the meeting.