- While attempting to rescue the snake, it ended up wrapping itself around her leg

Last week Friday, October 16, the Queensland Police Service posted a video on Facebook showing a unique situation. Cops were called out to help a woman who found herself in a scary situation after she tried to rescue a python.

According to reports, the woman saw the python while working in her garage. The non-venomous snake was stuck under a car and she tried to help it.

However, ECR reported the python turned on her and wrapped itself tightly around her leg. The cops were called out to help the woman, who was calm throughout the entire incident.

Couple joins 'How it started vs how it's going' challenge, share cute photos

At one point she even pets the snake and the police officer thought it belonged to her. "Do you want some help getting him back into his pen?" the officer asked her after they managed to uncoil the snake from her leg. 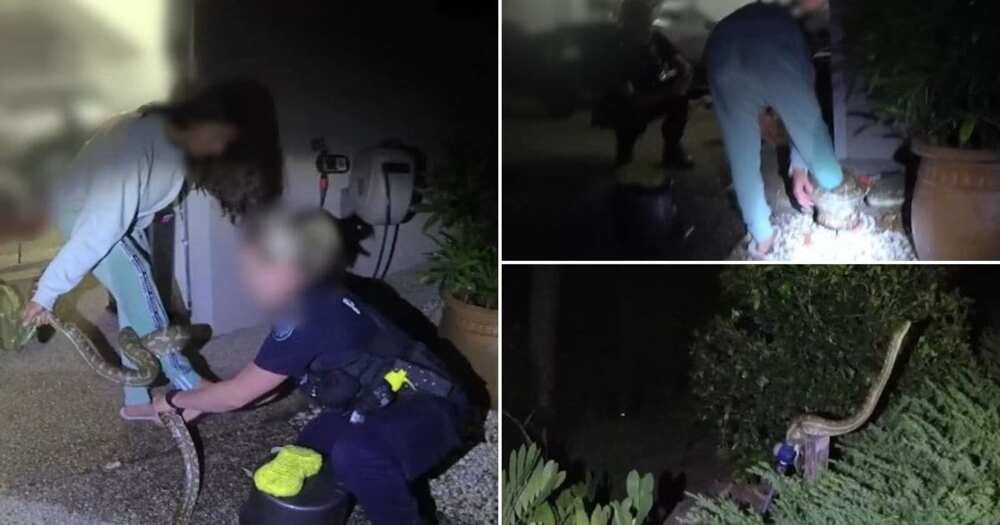 A woman attempted to rescue a python but ended up needing assistance as the snake got aggressive. Photo: Queensland Police Service / Facebook.
Source: UGC

The video gathered thousands of views and a lot of reactions. Many said they would not have been brave enough to try and help the snake.

"Good thing I'm not a cop, the lady wouldn't have a leg left, no way I'd be any good trying to help."

"OMG I screamed at the ‘Do you want help putting him in his pin' and the lass is like, 'Oh he’s not mine', off I go like the David Attenborough boss I am and release him in the bush."

"I personally would be passed out cold and not know what was going on."

See how this little girl controlled this big dog like her toy, this is how the animal reacted (video)

"Hell no. Is snake catching even a module at the academy?"

Meanwhile, Legit.ng earlier reported that a teenager in Thailand had one of the worst experiences in his life after a snake bit him while he was using a toilet.

Siraphop Masukarat was sitting on the toilet while at the same time watching videos on his phone on Tuesday, September 8, when he felt a sudden sharp pain.