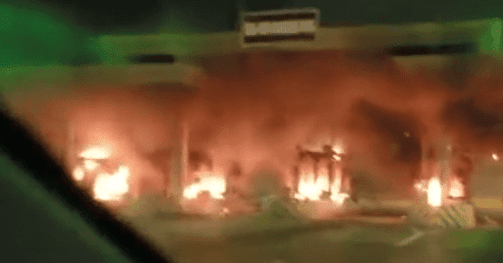 Hoodlums have set on fire the toll gate of the Lekki-Ikoyi Link Bridge, as #EndSARS protests degenerated in Lagos.

This followed the imposition of curfew and the drafting of the armed policemen and soldiers at the flash points of protests.

All the cubicles of the toll gate were burning, according to video clips made available online Tuesday night,

Protesters had defied the 24 hour curfew imposed by Governor Babajide Sanwo-Olu, which was to become effective from 4pm.

Although the governor rescheduled the effective time for the curfew to 9pm, armed soldiers and policemen stormed the Lekki Toll Plaza, on Ozumba Mbadiwe, just after dawn.

They shot at the protesters who were gathered there.

The number of casualties is still uncertain.

But as at 10pm, the protesters, who failed to leave the scene, when the shooting started, were hemmed in at both sides of the road, by the armed men, unable to leave.

Governor Sanwo-Olu has, meanwhile ordered a probe into the shooting.