- In a video shared to his Instagram page, he revealed he had been receiving threats ever since he was invited to join the panel

Nigerian social media activist, Mr Jollof, broke down in tears as he announced he was stepping down from the Delta state Judicial Panel of Enquiry after receiving death threats.

Jollof in a recent video shared to his Instagram story stated that following his invitation to join the panel, many have accused him of taking bribes and selling his integrity.

Lekki tollgate: I am hale and hearty, Eniola Badmus reacts to news that she was shot 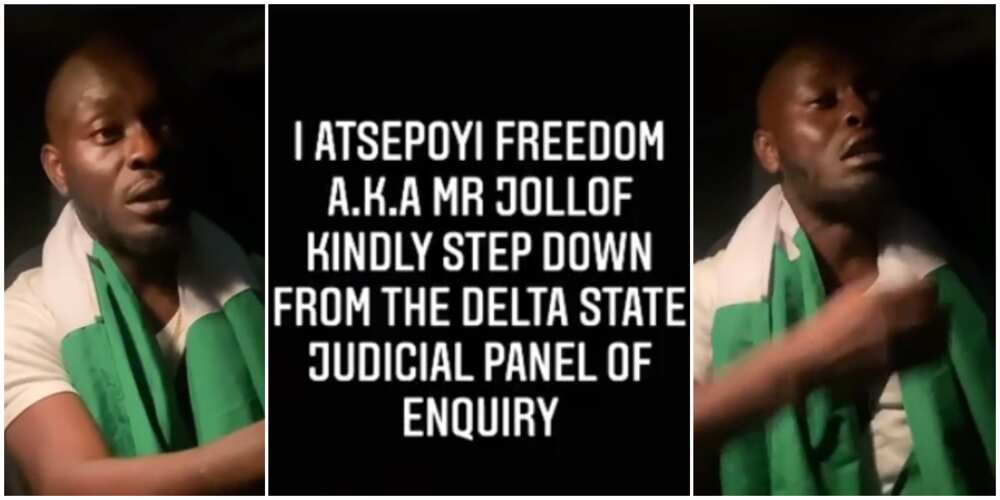 The Delta-born who broke down while making the video stated that his integrity is all he has and wouldn't trade it for anything. Due to the threats, Jollof revealed he no longer wanted any part in the panel.

"I won’t trade my integrity and family in serving the people I STEP DOWN from the Delta State Judicial Panel of Enquiry. @iaokowa I am very sorry sir I really want to serve but I need to save my name and the life of my family."

Meanwhile, Nollywood actress and producer, Eniola Badmus, has come out to debunk reports that she was shot dead during the shooting at Lekki tollgate on Tuesday, October 20.

Apparently, there were reports that a woman who looked like her was shot at the protest ground and this led many people to believe it was the actress.

Well, Eniola has come out to reveal that she is very much alive and that she could not make it to the protest grounds on the day of the shooting.