- Anthony Joshua was in Nigeria in 2019 when he visited his ancestral home in Sagamu, Ogun state

- Protests have sparked across several stated in the nation

Anthony Joshua has stated that he is currently sad about the turn of events in Nigeria as protests reach a whole new height on Tuesday night, October 20.

In a short clip, the British-Nigerian stated that he prays for the nation’s peace and positivity every night, adding that he also knows that it is getting to a stage where things are heating up.

Joshua who currently holds the WBA (Super), IBF, WBO, and IBO titles was first seen in Nigeria in 2019 when he visited his ancestral home Sagamu, Ogun state.

With his middle name as ‘Oluwafemi’, Joshua melted the hearts of many Nigerians when he was seen trying hard to recite the Nigerian national anthem.

Joshua has severally professed his love for Nigeria, he earlier stated that he was not aware of SARS activities; and not he says he is praying for the country.

“Even though I’m not there with you in the physical, we’ve been trying to make efforts to support your protest in the ground.

"I know it’s getting to a stage where things are heating up and tensions are high. In my prayers at night, I’m praying for peace and positivity. We are organizing many care packaged for the people on the ground." 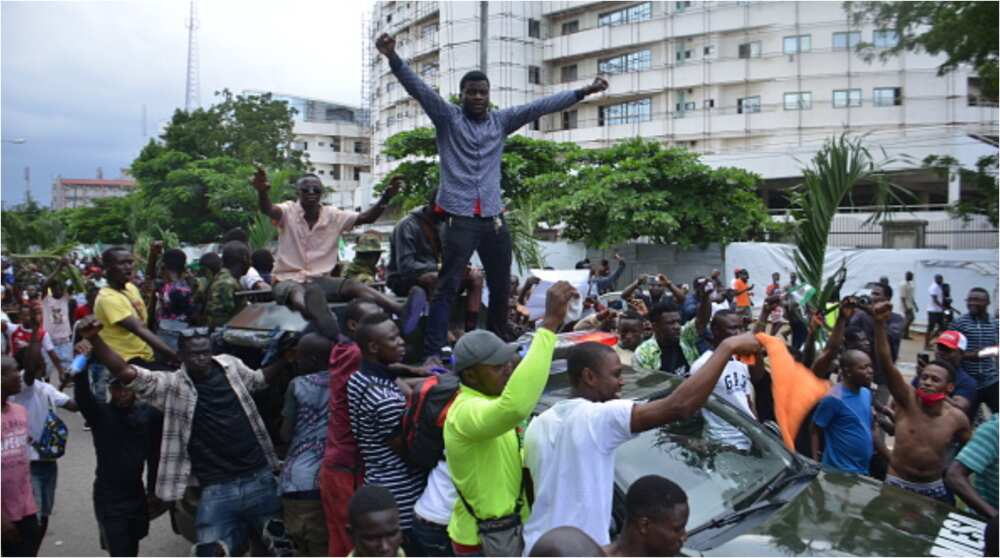 With the protests entering its Day 13 at the famous toll gate, the former Super Eagles striker via his foundation distributed food and drinks to protesters.

In his latest post on his social media account, the Wuhan Zall of China striker posted pictures as well as clips of officials of his foundation distributing the items to the protesters.

And Legit.ng earlier reported that, Nollywood actress and producer, Eniola Badmus, has come out to debunk reports that she was shot during the shooting at Lekki Toll Gate.

There were reports that a woman who looked like her was shot at the protest ground and this led many people to believe it was the actress.

Eniola has come out to reveal that she is very much alive and that she could not make it to the protest grounds on the day of the shooting.