Nigerian cross-dresser, Idris ‘Bobrisky’ Okuneye, recently made a joke about the young people who lost their lives during the End SARS protests, that many people found distasteful.

The socialite shared a now-deleted post on his Instagram page where he said that he would not join the End SARS protest until he got a fortified bulletproof vest from his village.

Bobrisky addressed those who wanted him to go out and protest and asked if they wanted him to join as a woman or a man. He said that he would have to go to Ijebu Igbo first before joining.

In the caption of the post, he added that he was not ready to die now. See a screenshot of the post below: 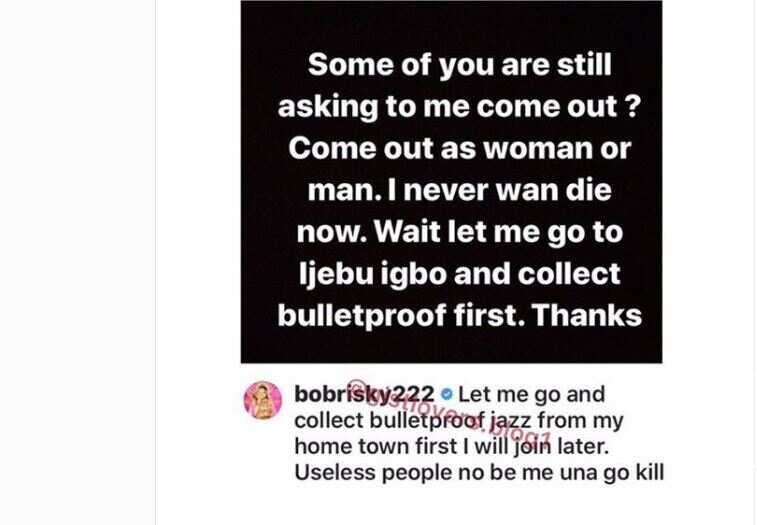 A number of people were not pleased with Bobrisky after he made a joke about fallen protesters. Photo: @gistlovers.blog1, @bobrisky222 / IG.
Source: Instagram

Bobrisky was subsequently called out on social media by people who felt that the joke was in poor taste considering the timing.

Here's what some of them said below:

Bob is just as confused as the Nigerian government.

Lies nobody is asking you to come out.

This is a disrespect on the fallen heroes,nobody need your sarcasm right now.

This person just doesn't know when to stop!!

This one is canceled already.

In other news, Legit.ng reported that Nigerian journalist, Morayo Brown, was said to be in trouble after TVC office seemed to be attacked by a mob.

Morayo alongside her The View co-host and other staff members tried to leave their office after it was noticed that their building was being attacked by a mob.

Seeing as they could not go out through the normal exit, the TVC staff had to find an alternative route but was eventually met with the mob.

Nigerian celebrity, Toyin Lawani, took to her social media page to alert fans about Morayo’s situation and told people that the journalist was not safe.

God Have Mercy On His Soul! How Will Apostle Joshua Cope Now? See What Happened To His Pianist

See Throwback Photo Of The Rev Sister That Decided To Get Married, Instead Of Sinning Against God (Photos)

SHOCKING: Wizard Returning From Witches Gathering Run Out Of Fuel, Crash Lands On Roof Top (Details And Video below)