As #EndSARS protest turns violent in different parts of Nigeria, Governor Nyesom Wike of Rivers state has imposed a 24-hour curfew in some areas of the state.

This was contained in a statement signed and released by Governor Wike's media aide, Kelvin Ebiri, on Tuesday, October 21.

Legit.ng gathers that Governor Wike in a state wide broadcast today also announced that the curfew will take place in the entire Oyigbo local government area of the state.

The governor explained that the curfew became necessary as suspected hoodlums have hijacked the #EndSARS protest.

According to Governor Wike, some hoodlums on Wednesday attacked and destroyed police stations and court buildings in Oyigbo LGA. 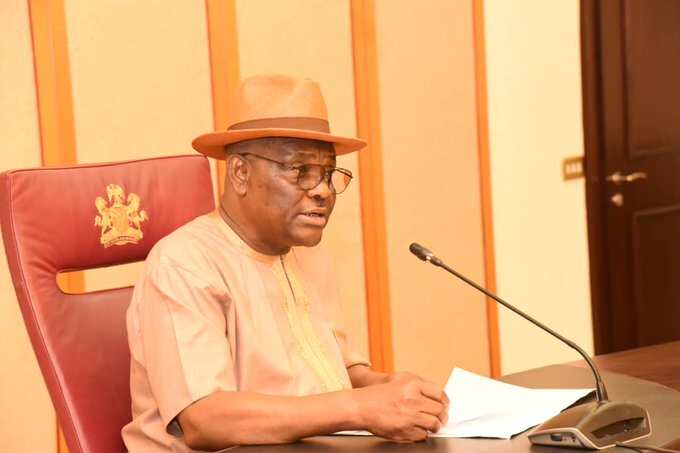 Another set of hoodlums were also on a rampage at the Ikokwu spare parts markets disturbing public peace and damaging property, he added.

Governor Wike has also directed security agencies to enforce the curfew with effect from 6.30pm on Wednesday, October 21.

Meanwhile, like many prominent Nigerians, a former president, Olusegun Obasanjo, has lent his voice on issues surrounding the ongoing EndSARS protest which has already turned violent in many parts of the country.

In his reaction to the turn of events on Wednesday, October 21, Obasanjo called on President Muhammadu Buhari to stop soldiers from shooting at protesters.

He urged the president to “restrain the military and other security agencies from using brute force as a way of ending the crisis.”

Similarly, a Nigerian elder statesman and prominent lawyer, Afe Babalola, has said that the deployment of soldiers and killings would not end the ongoing #EndSARS protest against police brutality across the country.

Babalola in a statement made available to journalists in Ado Ekiti, Ekiti state on Wednesday, October 21, also stated the imposition of curfew would not end the crisis.