Kepa Arrizabalaga could be sent on loan to La Liga side Sevilla during the January transfer window, reports claim.

The signing of Edouard Mendy has thrown the Spanish goalkeeper's future at Stamford Bridge in doubt and could be heading back home in January.

Kepa was in goal for Chelsea during their 3-3 draw with Soiuthanpton an the goalkeeper's was question after the Blues threw away two-goal cushion. 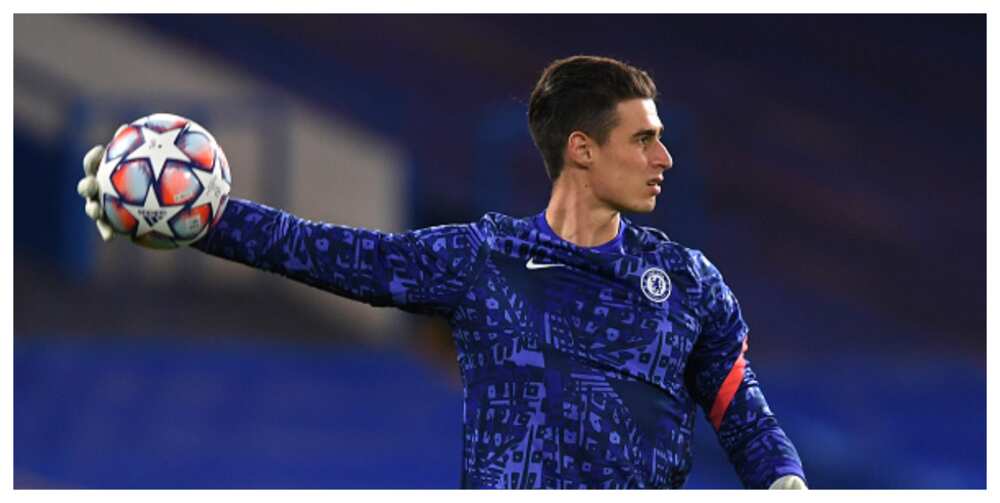 Kepa Arrizabalaga set to join Sevilla in January after being made 3rd choice. Photo by Mike Hewitt
Source: Getty Images

Mendy returned to the squad in their Champions League draw with Sevilla after recovering from injury during international duty with Senegal.

It is understood Frank Lampard would have given Willy Caballero to start against Sevilla if Mendy was not fit as Kepa will be demoted to third-choice.

The west London club have recently have even included Technical Director Petr Cech in their Premier League squad to curb the club's excesses in case of an emergency.

Mewnwhile, Legit.ng had earlier reported that Chelsea midfielder Jorginho might be unavailable when they take on Manchester United in this weekend's Premier League encounter at Old Trafford.

The 28-year-old was taken off the pitch in the 65th minute during the Blues goalless draw against Sevilla in this midweek's Champions League encounter.

Matteo Kovacic took his place for the remainder of the meeting but it was perceived to be a tactical move rather than an injury concern.

Legit.ng also reported that Chelsea have made an important statement about N'Golo Kante leaving Stamford Bridge following his clash with manager Frank Lampard. The Sun reports.

According to French news media outlet Le Parisien, the Frenchman was left furious after he was not allowed by the English boss to attend a friend's wedding before the international break.

The news outlet also claimed that the France international is ambitious about joining Real Madrid and wants to push for his exit next year.