Kelechi Iheanacho was in superb form for Leicester City in their 3-0 win over Ukrainian side Zorya at the King Power Stadium.

The Nigerian international was involved in all three goals that gave the Foxes that first European win of the season.

Leicester who bounced back from a Premier League defeat to Aston Villa were lucky not have gone behind earlier in the match as Kasper Schmeichel was forced to make a fine save. But in the 28th minute, Iheanacho assisted James Maddison to score from close range to make it 1-0.

Just before the break, Iheanacho's back-heel helped Harvey Barnes break loose from Zorya's defence and finished calmly to make it 2-0.

The Super Eagles striker deservedly got his name on the scoresheet after taking advantage of a defensive blunder to finish with his weaker right-foot.

Brendan Rodgers' side will be visiting north London to take on Arsenal at the Emirates Stadium in the Premier League.

The Foxes started the league on a bright note with a comprehensive win over 5-2 Man City but lost back-to-back games to West Ham United and Villa.

Meanwhile, Legit.ng had earlier reported that Super Eagles of Nigeria have who were 29th in the September Fifa rankings have dropped three spots and are now 32nd. 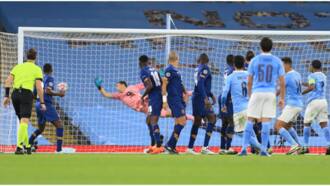 No thanks to their poor outing during the October 9 and 13 friendlies against reigning African champions Algeria as well as Tunisia respectively.

The Desert Foxes defeated Gernot Rohr’s side 1-0 before the Eagles were forced to a 1-1 draw by the Carthage Eagles of Tunisia, both games were played in Austria.

Ramy Bensebaini's lone strike in the sixth minute was all Algeria needed to outshine Nigeria in an international friendly game.