Jose Mourinho made fun of Tottenham star Pierre-Emile Hojbjerg after he attempted Zinedine Zidane's trademark turn on the ball during their match against LASK in the Europa League.

The Portuguese gaffer claimed he nicknamed the midfielder Zidane during half time talks which saw the no-nonsense star delicately beat two opposition players with the move.

The Denmark international sustained a head injury which required stitches before getting back on the pitch with a bandage wrapped around his head. 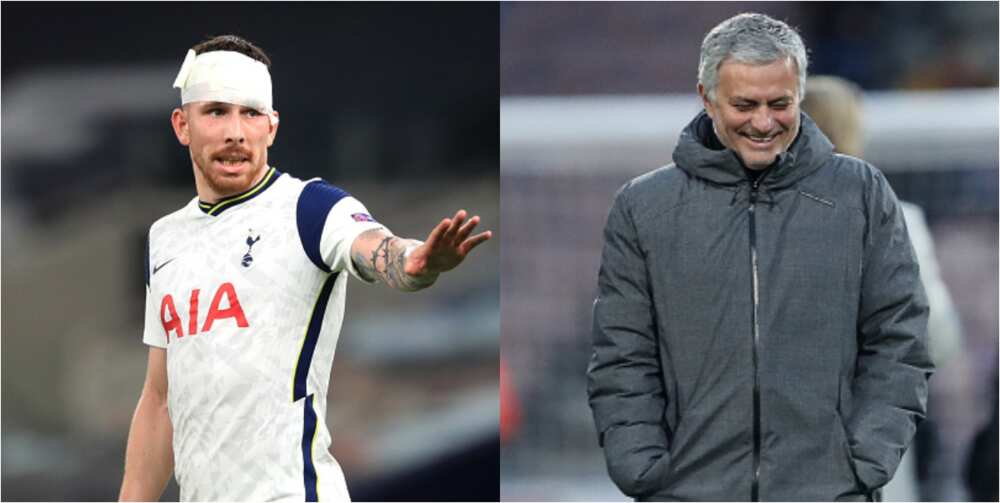 However, Mourinho is hoping Hojbjerg will not repeat that piece of skill again when he addressed journalists in his post-match press conference:

"We were having a laugh at half-time and we were all calling him Zidane. Very nice but don't do it again, Pierre!"

The 25-year-old has made a promising start at his new club since his £15million from Wolves this summer.

And the midfielder was influential in Spurs 3-0 victory over the Austrian side and Mourinho has described his qualities as captain material.

"He's a very good player, a good leader and a captain without the armband."

Meanwhile, Legit.ng had earlier reported that Jose Mourinho believes that Tottenham thought it was over after establishing a commanding lead against West Ham in their Premier League clash, Daily Mail.

The Hammers scored three goals in the last eight minutes of the match to earn an emphatic draw at the Tottenham Hotspur Stadium.

But Mourinho has refused to blame his players for assuming that they had secured the win and not been able to cope for the last few minutes of the game.

Legit.ng also reported that Arsene Wenger has revealed that he did not include Jose Mourinho in his book to avoid it being a negative write up.

The legendary Arsenal manager launched his new book 'My Life in Red and White' revealing a series of stories unknown to the world about his career as a manager.

The 70-year-old made sure that he did not include Mourinho in any of the stories he told in his book to avoid making negative comments about the Portuguese manager.