- A young Nigerian man identified on Twitter as David Hiddy, recently took to social media to share his experience with a looter in Ilorin, Kwara state

- The young looter dared David to come and collect them back

The capital city of Kwara state, Ilorin, was recently filled with pandemonium when series of dishonest Nigerians took to the streets to start looting supermarkets and small businesses.

A young man identified simply as David Hiddy on Twitter took to the microblogging site to share his own experience with a looter that he accosted after leaving his shop.

David shared a video of the incident on his page. A young boy was seen carrying a chair and other things which David identified to be his properties. 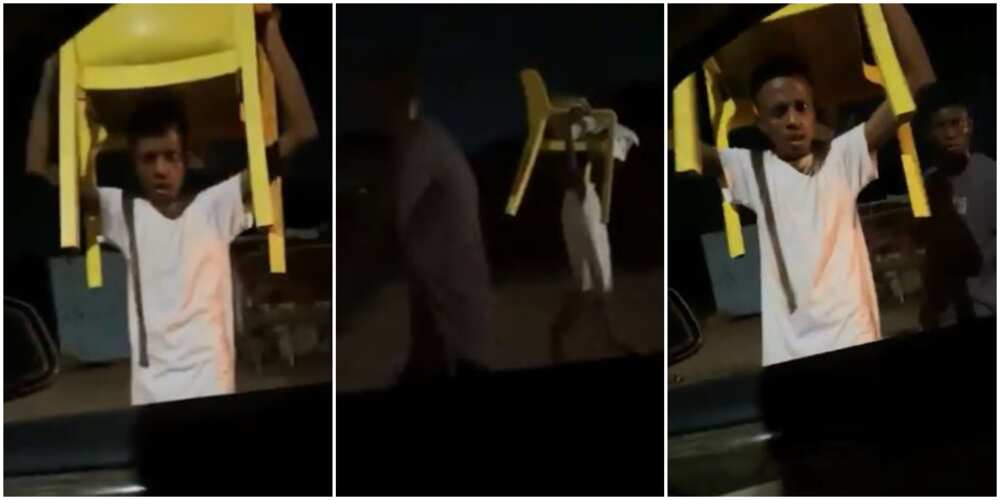 This young looter did not care that he was approached by the owner of the items he stole. Photos: @hiddygram / Twitter.
Source: Twitter

He called on the young boy and asked him where he got the items from. The boy only looked at David suspiciously and started to walk away. David then asked him if he knew the things he was carting away belonged to him and then the young boy replied in Yoruba telling him to come and collect them.

David was obviously filled with shock, amusement and dismay and could only let out his emotions with a small laugh.

“Imagine this guy carry my chair in my shop at Ilorin shopping mall and I can’t even stop or collect it from him. Everything is gone.”

Legit.ng had earlier reported that the EndSARS protest took another turn in Lagos on Thursday, October 22, when some youths of Maza-Maza, Mile 2 area of the state uncovered a warehouse in the area stocked with COVID-19 palliatives.

How should convicted looters be punished? | Legit TV