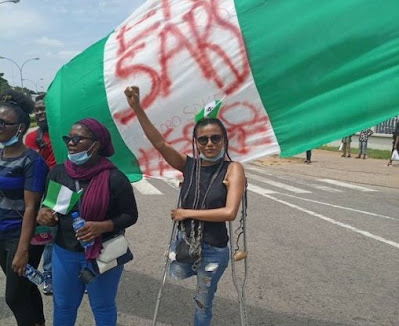 At first, many thought the #EndSARS campaign was one of those routine social media frenzy. But the movement, which is aimed at addressing deeply-ingrained culture of police brutality in Nigeria, has since gained global attention both online and on the streets — about two weeks after it commenced.

The protest started as a clamour for an end to the misconducts of the now-disbanded special anti-robbery squad (SARS). The protesters, however, expanded their demands to include a comprehensive reform of the police.

Just like life itself, the campaign has been a mixed bag since it commenced. Apart from the fact that it was hijacked by thugs in some parts of the country, it has also put a smile on the faces of some Nigerians who have hitherto been battered by the vicissitudes of life.

We examine how the #EndSARS protest has helped some Nigerians so far.

She had no limb like other protesters, but for Jane Obiene, the campaign against police brutality in the country is a fight to the end.

With the aid of her crutches, Obiene joined #EndSARS protesters to demand an end to harassment and extrajudicial killings of Nigerians by the police unit.

It wasn’t long before her sheer passion despite seeming disability fetched her goodwill from the public.

Shortly after her picture went viral, Nonso Egemba, a medical expert better known as Aproko Doctor, had launched a fundraiser to help her obtain a prosthetic leg.

Obiene was said to have graduated in 2013 but had been unable to get a job due to her disability. As of the time of this report, the fundraiser had garnered more than N7.5 million.

In a follow-up post, Aproko Doctor revealed that work had commenced on her leg.

After the successful fund raising of the prosthetic leg for Jane Obiene;

NIGERIAN Youths are already on the move in securing Charles Nnaman, the guy who protested in the #EndSARS protests at Surulere, Lagos another prosthetic leg for him as well.#NewNigeria pic.twitter.com/1uVxVs6yq0

Like Jane, Charles Nnamani joined #EndSARS protesters at the National Stadium in Surulere, Lagos, with no limb.

According to Akproko Doctor, he would also get a prosthetic leg from the public donations made while what is left of the fund will be used to help others.

As of now, the donation link is disabled

A total of 7 million, five hundred and fifty three thousand, six hundred and seventy five naira only was raised to get Jane and Charles Nnamani prosthetic legs

The funds shall be disbursed responsibly and also help others

The thought of losing a child is never a good one for every parent. Dominic Onyeukwu, whose son was allegedly killed by SARS operatives in Delta state, captured the traumatic experience associated with his demise.

A video of Onyeukwu mourning his son had gone viral and attracted the attention of many people including Reno Omokri, a former aide to ex-President Goodluck Jonathan.

Does anybody know how to reach this man? #SarsMustGo pic.twitter.com/BK0MT1SsRx

Omokri, thereafter, launched a fundraiser for the bereaved father while also promising to support him in the wake of his son’s demise.

The killing of Onyeukwu’s son among other instances ignited the renewed protests against the dreaded police unit.

For a yet-to-be-identified woman, it was probably one of those days to roam the streets to sell her groundnut. But on getting to the Lekki toll gate, one of the venues for the ongoing #EndSARS campaign in Lagos, luck smiled on her.

Her struggle to eke out a living caught the attention of protesters who donated towards improving her standard of living.

John Ogu, a Super Eagles midfielder, who was also at the Lekki toll gate last Wednesday, was part of those who contributed to raise funds for the groundnut seller. It was gathered that the protesters raised N500,000 hours after call for the donation was made. It, however, increased to over N2,350,000 later.

A TOTAL SUM OF N2,350,000 (TWO MILLION THREE HUNDRED AND FIFTY THOUSAND NAIRA) WAS RAISED FOR THE GROUNDNUT SELLER BY THE NIGERIAN YOUTHS AT THE LEKKI TOLL GATE TODAY!!!
????✊????????????#ReformPoliceNG #EndPoliceBrutality

The #EndSARS protest may have continued to elicit different reactions but it would be remembered for also bringing succour to some Nigerians.