- Though there was no shooting, a man allegedly died while trying to leave the warehouse with his loot

- In the last 48 hours, no fewer than three states have experienced looting of COVID-19 palliatives stored in warehouses

COVID-19 palliative items were looted by hoodlums in Benin City, the Edo state capital, who stormed the government warehouse along Medical Store Road in the Uselu axis on Saturday, October 24.

The mob had tried gaining access earlier but were prevented by military personnel.

According to Premium Times report, they eventually overpowered the military men and succeeded in gaining entrance into the warehouse.

Residents stormed the warehouse in large numbers to partake in looting. 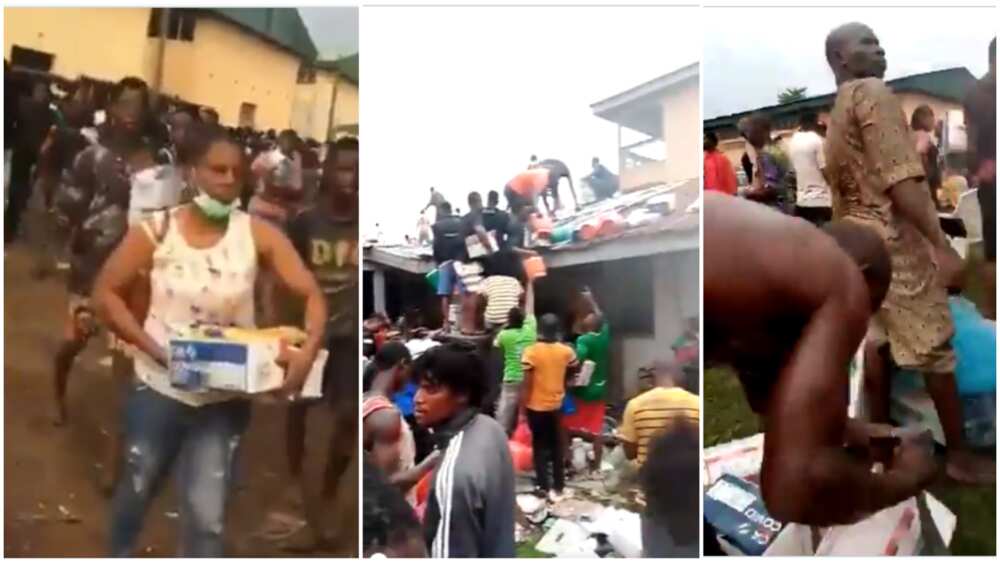 It was gathered that there was no incident of shooting , though some sustained injuries in the rush to cart away food items.

Daily Trust reports that one person is feared dead. The victim was reportedly struggling in the midst of the hoodlums to gain entry into the warehouse when he fell down. He was stepped on and in the process died of exhaustion.

Security operatives are reportedly trying to bring the situation under control at the moment.

The looting of COVID-19 palliative warehouses started on Thursday, 22, in Lagos when a warehouse in the Maza-Maza, Mile 2 area of the state was discovered. It was stocked with items branded CACOVID palliatives Lagos state.

In the videos circulating online, a massive warehouse was seen filled with numerous foodstuff including bags of rice, garri, sugar, packs of noodles, pasta, among other things. The items were branded CACOVID palliatives Lagos state.

Less than twenty-fours after, some youths burst another warehouse, the Cocoa House in Ede area of Osun state and looted various food items kept in it.

Another one was discovered in Plateau state. The warehouse which is located in the Bukuru community of Jos South local government area of the state was stormed by a staggering number of Jos residents.

Meanwhile the Ekiti state government raised an alar, warning that the items looted from some warehouses in Ado-Ekiti on Friday, October 23, were not COVID-19 palliatives but fertilizers.

The government appealed to the people not to consume the items which it said can kill.