- In what came as a rare gesture, the former Nigerian leader hailed the president for addressing the country amid tension surrounding EndSARS

Chief Olusegun Obasanjo has lauded President Muhammadu Buhari after his national address on the EndSARS protest.

The former head of state was one of the living Nigerian leaders invited by the president for a virtual meeting on Friday, October 23.

Speaking during the meeting, Obasanjo commended President Buhari for recognising that peaceful protest is part of Nigerian democracy.

Legit.ng recalls that the president addressed Nigerians on Thursday evening, October 22, amid nationwide demonstration demanding good governance and an end to police brutality. 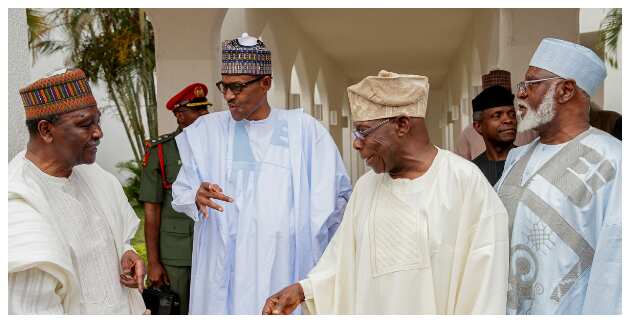 In the speech, the president suspended the EndSARS protest and assured that the demands of the protesters would be met accordingly.

Buhari later hosted all the former Nigerian leaders including Goodluck Jonathan, Obasanjo and other heads of state to brief them against the situation of the nation.

Speaking at the virtual meeting hosted by the president, Obasanjo, who noted that "the nation had been waiting" said he was happy that the demands of the protesters are being entertained.

"I commend the speech of last night. The nation had been waiting. You made points that I believe need to be commended.

“Peaceful demonstration is part of democratic practice. The demands of the genuine protesters were accepted, and you are working on implementation. We commend you,”

Meanwhile, the presidency has defended President Buhari's reticence on the controversial Lekki shooting during his nationwide address on Thursday, October 22. 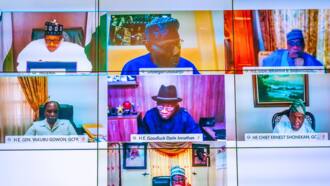 Speaking on Friday, October 23, during a live show on Channel TV, media aide to the president on media and publicity Femi Adesina, said Buhari's silence on the "carnage" is because an investigation is still ongoing.