Khabib Nurmagomedov has cemented his name in UFC's Hall of Fame following his second-round stoppage of Justin Gaethje.

The lightweight champion made his fight over the hard-hitting Gaethje look easy as he submitted the American via a triangle in the second round.

Khabib who recorded his 28th victory without a defeat in Mixed Martial Arts immediately fell to the ground in tears as he mourned his father who passed on earlier in the year due to illness.

The Dagestan fighter announced his retirement from the Octagon claiming he would never fight without his father in his corner.

The 32-year-old has beaten top names on the UFC roaster including Conor McGregor, Edson Barboza, Dustin Poirier and a host of other tough contenders.

Khabib who has the highest strike rate in UFC's history delivered several shots to Gaethje's head in the first round as the Highlight concentrated more on leg-kicks. 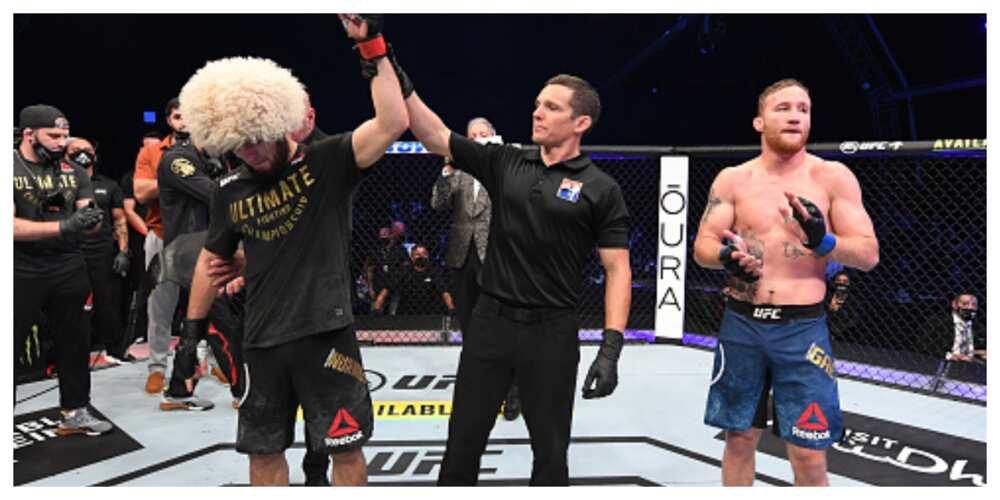 The Russian then came all out in the second round with the takedown and delivered the triangle as Gaethje tapped out to the superior power of Khabib.

The lightweight championship will be left vacant as McGregor and Poirier could contend for the vacant title in the nearest future.

Meanwhile, Legit.ng had earlier reported that Israel Adesanya successfully defended his middleweight crown after a second-round stoppage of Paulo Costa.

The Nigerian-born New Zealand fighter finished the bout in the second round after catching Costa with a leg kick in the face and floored him with several punches.

The Nigerian-born New Zealand fighter finished the bout in the second round after catching Costa with a leg kick in the face and floored him with several punches.