Manchester City striker Sergio Aguero up a hamstring injury during his side's 1-1 draw against West Ham United at the London Stadium.

Pep Guardiola confirmed the development while addressing the media after dropping valuable points away from home.

The Argentine recently returned from a long injury layoff but is now ready to embark on another spell on the sidelines.

Phil Foden replaced Aguero on the pitch at the start of the second half and scored the crucial goal that helped them secure one point away from home. Guardiola said when asked about the striker: 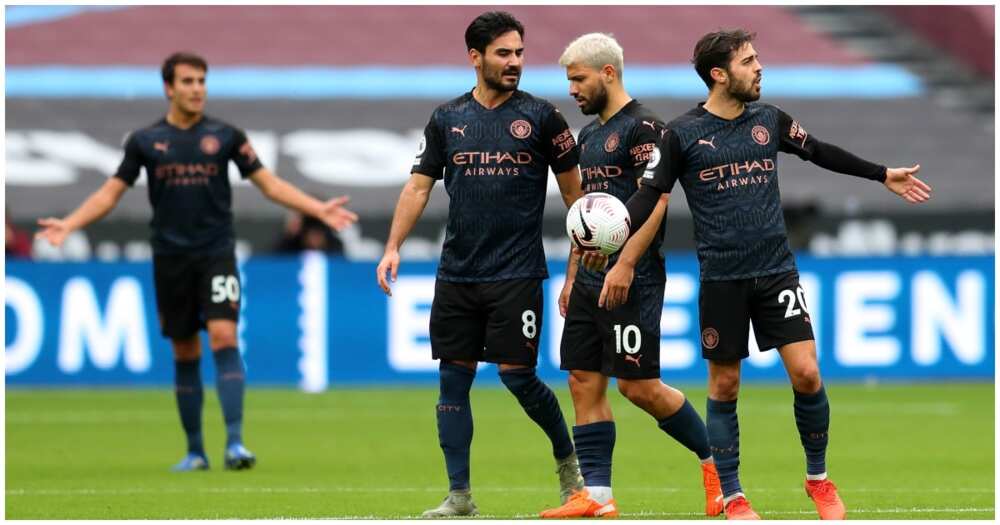 Sergio Aguero is set for another spell on the sidelines after suffering yet another injury during West Ham draw. Photo: Catherine Ivill.
Source: Getty Images

It was later revealed on the Manchester City website that Aguero had in fact suffered a hamstring injury in the first half and is set to be out for the next couple of days.

Because of his injury, it is highly likely that Aguero will likely miss clashes against Marseille, Olympiacos, Sheffield United and Liverpool.

The fact that the Citizens have not made the brightest start to the season also does little to help their cause.

In five league games, Guardiola’s men have only won twice and sit in 11th on the log with a mere eight points.

On the day, Guardiola attributed their lack of cutting edge in the Westham game to the Hammers defending a bit too deep.

“We started really good, we concede a goal the first time they arrive. They defend so deep and we had the chance at the end to score the goal. Now we move forward

Legit.ng earlier reported that West Ham vs Man City settled for a 1-1 draw at the London Stadium after both teams could not separate themselves in the game.