Jamie Vardy's second half goal was enough to hand Leicester City all three points away from home as the Foxes defeat Arsenal 1-0 at the Emirates Stadium.

Cengiz Under was found with a ball over the top and Vardy made no mistake with him powering home a header in the 79th minute to help his side claim all three precious points.

Arsenal started the game brightly as they continued to ask the questions but they failed to make any of their chances count. 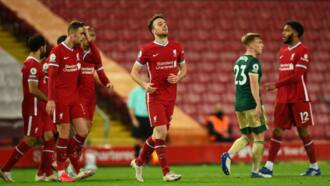 One great chance for Alexandre Lacazette was wasted as he fluffed the ball way over the bar before the Frenchman has another one ruled out for offside.

Pierre-Emerick Aubameyang was presented with a glorious chance in the first half too, but the Gabonese ballooned the ball away.

David Luiz made a superb interception and the ball through to the Gunners' captain whose effort was deflected over the bar by his own team-mate.

Arsenal manager Arteta looked frustrated at half time after seeing his side with 12 shots, six corners but no goal. Upon return from the break, the visitors looked more promising and Maddison saw his curling shot deflected over for a corner in the 54th minute.

The only goal of the game came in the 79th minute after Jamie Vardy caught the Arsenal defence counter attack yet again and powered home with his head. It ended: Arsenal 0-1 Leicester City.

Injuries for Bukayo Saka and David Luiz add to the disappointed for the Gunners.

Meanwhile, Legit.ng earlier reported that Arsene Wenger has revealed he turned down chances to manage Champions League teams due to his loyalty to Arsenal.

The 71-year-old managed the Gunners for over two decades before parting ways with them in the summer of 2018. Despite winning three Premier Leagues and seven FA Cups, the Frenchman failed to win a European title for them.

And two years after leaving the North Londoners, Wenger says he is open to returning to football management but insisted he is skeptical about the job.