- Lagos state would need a trillion naira to stand back on its feet, Governor Babajide Sanwo-Olu disclosed

- Many private and public facilities were vandalised and looted on Wednesday, October 21, as hoodlums hijacked the EndSARS protest

With Lagos set to restore normalcy and bring peace back to life following a wanton of destruction, Governor Babajide Sanwo-Olu said his government would need N1 trillion to rebuild the state.

The governor made this known when the speaker of the House of Representatives, Hon Femi Gbajabiamila, paid him a solidarity visit on Sunday, October 25, in his Marina office.

It would be recalled that Lagos was the epicentre of the misfortuned looting and destruction of private properties and public assets by hoodlums which peaked on Wednesday, October 21. Many facilities including the Television Continental (TVC), high court, buses terminal which allegedly had 89 new BRTcs, The Nation newspaper office and the Lagos palace, among others, were attacked and plundered. 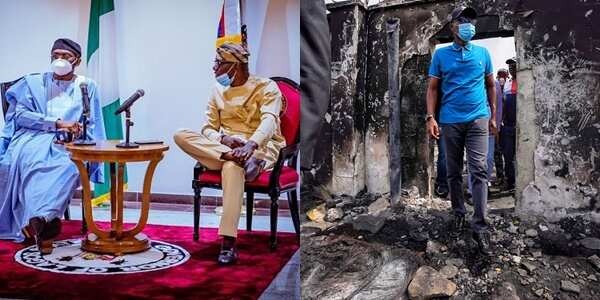 Governor Sanwo-Olu said the state is in dilemma considering the massive destruction, but expressed hope that Lagos will heal come back stronger.

Addressing journalists after the meeting, Gbajabiamila, who echoed the discussion with the governor, said a trillion naira would be needed to rebuild destroyed assets.

“The governor was telling me just now that it was going to cost about a trillion naira to rebuild Lagos. That makes my heart heavy. "

Meanwhile, All Progressives Congress (APC) national leader, Bola Tinubu, paid a solidarity visit to the governor of Lagos state, ending the speculation that he travelled out of the country. 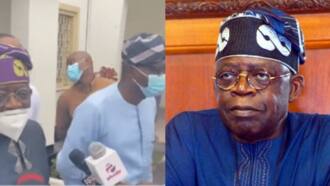 Tinubu's visit to Sanwo-Olu came on Saturday, October 24, at the Marina State House amid a deluge of tragedies occasioned by wanton of destruction in the state by hoodlums.

Addressing journalists, the APC leader expressed displeasure with how EndSARS protest transcended into violence that led to the vandalisation of the government properties and private facilities.