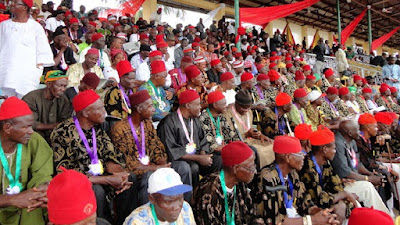 The Ohanaeze Ndigbo has lauded Governors in the South-West geopolitical zone for their quick intervention to calm frayed nerves over a frivolous quit notice given to the Igbos in Lagos by mischief-makers.

Following the outbreak of violence in the wake of deaths of armless End SARS protesters at the Lekki toll gate, some unnamed groups had warned Igbos living in the Southwest to vacate or face dire consequences.

Ohanaeze, in a statement by its spokesman, Chuks Ibegbu and issued to newsmen, on Monday, warned that such quit notices were capable of causing the unravelling of the country, noting that Ndigbo has never done same to other Nigerians in Igbo land.

The Igbo socio-cultural group, called on President Muhammadu Buhari-led government to take such issue seriously, positing that if such threats are not properly halted, it could pose a great danger to the existence of Nigeria.

According to Ohanaeze, “we are all joking with our existence as a nation, and unless we all believe that Nigeria is a mere geographical expression.

“Nobody has a monopoly of issuing Quit Notices. Ohanaeze advise agitators and their leaders not to inflame the country with inciting utterances”.

The apex organization, however, called on Ndigbo within and outside Nigeria to learn the lessons of all the quit notices and develop their homeland.