- In the tweet, Davido was promoting Wizkid's debut album

- Davido urged his fans to support the album by buying it

Fans have taken to the popular micro-blogging platform, Twitter to revisit a tweet by singer Davido about his colleague Wizkid.

The tweet was shared on June 8, 2011, and it was about Wizkid's Supertsar debut album.

Promoting the album, Davido urged his fans and followers to support the musician. According to him, the album is available on the streets of Lagos. The father of three also stated that the album can be gotten with a sum of N150 or N200. 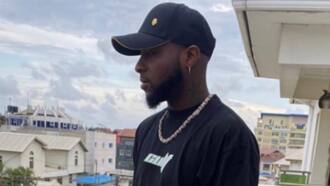 In other news, Legit.ng earlier reported that singer Davido took his first daughter Imade to work.

In the photos, Davido was seen flanked by his daughter who wore a cute blue and white dress with white leggings and a white pair of sandals. The singer on the other hand opted for a simple black t-shirt with blue jeans and simple footwear.

The adorable photos were shared on Imade’s Instagram page and followed with a caption that showed that it was a ‘take your daughter to work’ kind of situation.

The music star is no doubt a celebrity who shows great love to all his three children despite not having relationships with some of their mothers.

In another story, Davido celebrated his son Ifeanyi on his first birthday.

The singer took to his social media pages to celebrate his son, Ifeanyi, who clocked a year old and fans joined in the online celebration.

His friend and member of the 30 billion gang, Peruzzi, also celebrated the little boy as he quoted Davido's birthday message with one of his own.