- Despite a recent positive coronavirus test, Sadio Mane is among the top 10 goalscorers in the league with four goals to his name Son has formed a lethal partnership with Harry Kane since the start of the new season, with the pair scoring goals for fun.

The South Korean opened his goal account with four goals in Spurs' 5-2 win over Southampton back in September before he added two more against Man United.

He will be looking to add to his tally when his side take on Burnley on Monday night, October 26.

The Spurs' hit-man is joint-top with Everton's Dominic Calvert-Lewin who also has seven goals to his name from six games.

The Englishman had a chance to move top on the standings but fired blanks on Sunday, October 25, as Southampton stunned the Toffees 2-0 at St. Mary's.

Leeds' Patrick Bamford, Mohamed Salah and Jamie Vardy are all tied in second with six goals, with the latter's coming against Arsenal at the Emirates. 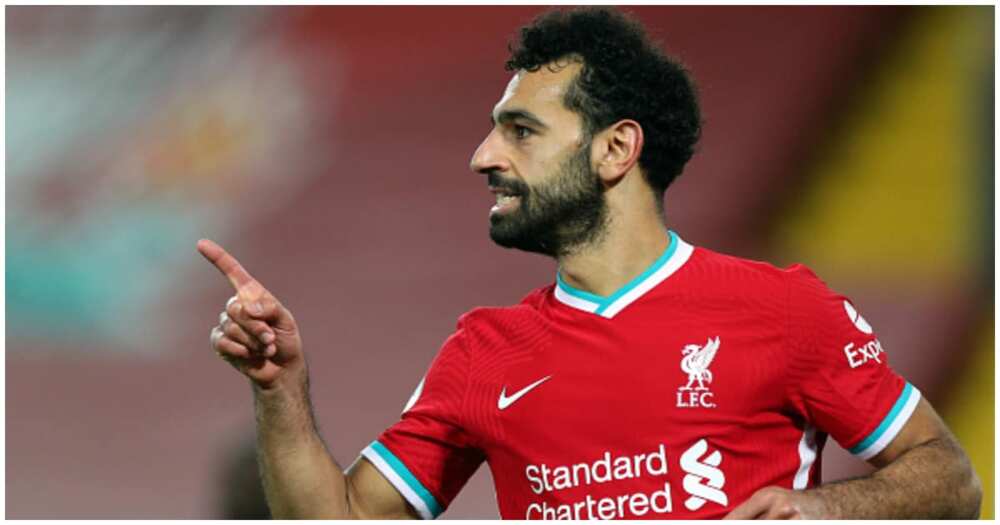 Despite Liverpool's struggles, Salah has found the back of the net six times so far this season. Photo by Peter Byrne.
Source: Getty Images

Vardy, who won the Golden Boot award last season showed intent to reclaim the prize as he found the back of the net shortly after coming on to guide his side to victory.

The pair of Harry Kane and Wilfred Zaha have both scored five goals each, with the Crystal Palace star finding the back of the net against Fulham on Saturday.

Interestingly, despite boasting of a star-studded attack line, Chelsea have no player among the top 10 scorers, with Jorginho their highest goalscorer with three goals to his name.

Earlier, Legit.ng reported that Premier League match six presented a number of surprising results as Everton's fine form was brought to a halt at Southampton.

The Toffees were hammered 2-0 by the Saints, with Danny Ings setting up both James Ward-Prowse and Che Adams to inspire them to victory.

However, despite Everton's defeat, they still top the charts with 13 points, on level with champions Liverpool who sit second.

The Reds laboured through their match six against Sheffield United to salvage a 2-1 win at home on Saturday, October 24.