PDP blasts Governor Sanwo-Olu - "What do you need ₦1 Trillion for?' 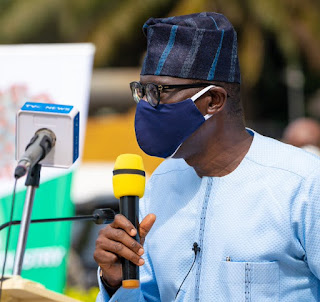 The Peoples Democratic Party (PDP) in Lagos State, on Monday faulted Gov. Babajide Sanwo-Olu’s alleged claim that it will take N1 trillion to restore all properties and facilities destroyed by hoodlums during the violence that trailed the #EndSARS protests in the state.

The PDP disagreed with Sanwo-Olu and the ruling All Progressive Congress (APC) in a statement in Lagos by its Publicity Secretary, Mr Taofik Gani. Gani accused the Sanwo-Olu-led APC government of “dishonesty and extortionate tendency”.

According to him, the act of inflating and over costing governance in the state has now become spread in the Lagos State Government’s commitment to service delivery. “Our accusation is coming on the heels of the declaration by the state governor that the state will need N1 trillion to repair the destruction arising from the #EndSars attacks.

“The governor had recently told governors from the South West and ministers that the amount is projected for reconstruction purposes. “The Lagos PDP believes that such a bogus and hasty amount can only be claimed by persons in government who are likely to benefit from such proceeds. “The party particularly raises the alarm that the money as projected is targeted at restituting known infrastructure and businesses of APC leaders and not honestly for all genuine victims per se,” he said.

The PDP spokesman, therefore, challenged Sanwo-Olu and the ruling party to make public every kobo and the beneficiaries as envisaged by the governor. He added: “The trillion naira is bogus and extortionate. We specifically want to know whether the Lekki toll plaza is involved.

This plaza should rather be demolished. “The people will resist any form of approval for levy, over taxation or loan to spend the trillion naira. We put the House of Assembly on the alert to reject any bogus request.” Recall  that the #EndSARS protests in Lagos took a violent dimension on Oct. 20 when men in military uniform allegedly shot protesters who defied the curfew at Lekki Toll Gate.

The development sparked violence in Lagos and other states when suspected hoodlums hijacked the protest and began to kill, loot, vandalise and raze public and private buildings and vehicles. Among the places attacked was the Palace of Oba Rilwanu Akiolu, the Oba of Lagos.