- The minister of FCT, Muhammad Bello said that some hoodlums stormed a warehouse of COVID-19 palliatives in Abuja and carted away food items

- According to him, there would be heavy deployments of security operatives to prevent the re-occurrence of lootings

Following the lootings of both public and private businesses in Abuja by hoodlums, the minister of the federal capital territory (FCT), Muhammad Bello, has asked security operatives to arrest and prosecute those who invaded a warehouse where COVID-19 palliatives were kept.

TheCable reports that some hoodlums had invaded the warehouse located in Gwagwalada area council around 9 am on Monday, October 26, and carted away bags of grains, cartons of noodles and other food items.

Legit.ng gathered that while speaking at an emergency meeting with leaders of various security agencies in Abuja, the minister asked the culprits to return the stolen items immediately.

He noted that there would be heavy deployments of security operatives to safeguard factories and warehouses at Idu industrial area in the nation's capital. 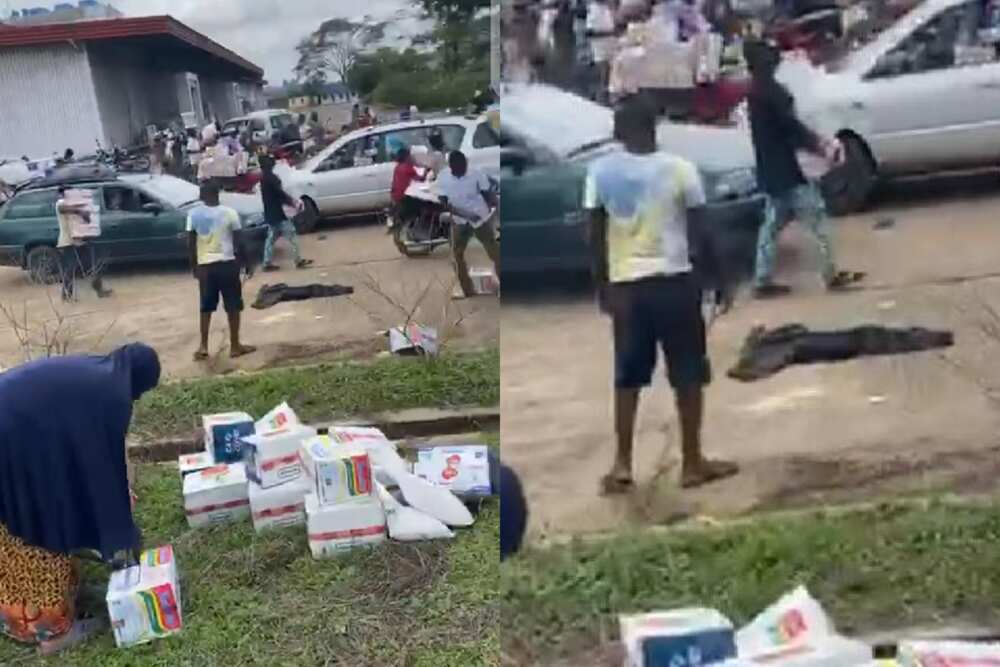 “What is going on is was no longer #EndSARS protest but broad day stealing by hoodlums.”

Also speaking at the meeting, the minister of state for FCT, Ramatu Aliyu, said no nation could survive without a food reserve.

She urged council chairmen and monarchs to reach out to opinion moulders and unite the people against looters.

It would be recalled that some warehouses containing COVID-19 palliatives have been raided in at least seven states, including Lagos, where the looting began last week.

Some governors said they were storing the palliatives in case of a second wave of the coronavirus while others said they had started distributing them before they were looted.

Just in: Violence erupts in Ebonyi as hoodlums, police engage in gun duel after burning of Abakaliki station

Meanwhile, Legit.ng had previously reported that President Buhari issued a stern warning to the parents and guardians of those who have been continually looting private businesses and government properties under the guise of protest.

It was reported that the president, in a statement on Sunday, October 25, urged the parents to warn their wards against the destruction and stealing of goods.

Many private businesses, public facilities including the COVID-19 warehouses in some states have been looted dry by hoodlums.

Ortom begs Buhari not to reverse ban on rice importation 0

FG increases number of beneficiaries of N-power, school feeding, others  0

Remember Nollywood Actress Nuella, Meet Her Husband Who Is Also An Actor And Their Adorable Daughter 0

[WATCH] Side Chick Beaten Mercilessly By Main Wife (Details below) 0

REVEALED! Actress, Destiny Etiko Opens Up On Sleeping With Men For Money (Details below) 0

I Went to My Boyfriend’s House, I Met His Brother That Is More Handsome Than Him But U Won’t Believe What Happened Next 0

How can Nigeria's economy look to stabilise as a global depression looms? 0

2023: ‘Northern oligarchy planning to use Jonathan as short bridge’ – Jackson-Ojo 0

Businessman up for money laundering 0

Govt rules out return of US dollar 0

5 Most Dangerous Men In The World, One of Them Is a Nigerian (Details below)

“We Don’t Sleep With Men For ₦2 Million, God Forbid” – Bobrisky Reveals Amount He Charges For A Run

Damilola Afolabi better known as L.A.X has joined the list of Lagos landlords after completing his new house in Lagos. It has only been days

"We have heard lies being thrown around in the media. They are saying we have been captured to white-wash the gukurahundi reburial. Well let me

Bukola Saraki, a former Senate President, has condemned the massacre of some rice farmers in Jere Local Government Area of Borno State. Saraki urged the government

Illegal use of siren, tinted vehicles are prohibited – Police warns

The Ebonyi state Police Command has warned against the illegal use of sirens and tinted vehicles in the state. The command also warned against covering of