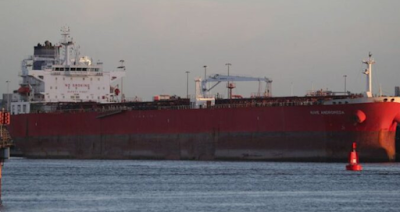 Hampshire Police has announced the arrest of seven men from Nigeria “who attempted to hijack” an oil tanker on the Isle of Wight, United Kingdom.

The stowaways, whose names are withheld, were said to have “illegally boarded” the ship in Lagos, Nigeria.

According to the BBC, the men were detained when 16 members of the Special Boat Service (SBS) military forces stormed the Nave Andromeda ship on Sunday night, ending a 10-hour stand-off with the crew members which started when the stowaways reportedly became violent.

The SBS forces arrived the ship by rope from four Royal Navy helicopters after nightfall when the 22 crew members locked themselves in a room known as “the citadel” to call for assistance from a secure space.

Hampshire police spokesperson said the seven men were held on suspicion of “seizing or exercising control of a ship by use of threats or force under Sections 9(1) and (3) of the Aviation and Maritime and Security Act 1990”, adding that “all 22 crew members are safe and well and the vessel is now alongside in the port of Southampton”.

Chris Parry, former Royal Navy officer,  said the operation to hijack the vessel was over in “under nine minutes” when the heavily armed officers stormed the vessel.

“From the time the helicopters went in and the SBS roped on to the ship, they rounded up the people pretty quickly. I think the stowaways themselves accepted this was probably the end of the journey for them and there probably wasn’t any point in resisting heavily armed men approaching them,” he said.

Ben Wallace, defence secretary, who said there was a “clear threat to life” on the ship, added that it is a crime the state cannot tolerate.

“What was emerging was a clear threat to life on the ship and at that point the police made representation to the Ministry of Defence that they didn’t have the capability to do what was needed in these challenging circumstances,” Wallace said.

“We were under the awareness that the suspects were also threatening to do something with the ship. If they were threatening to take control of the ship then, of course, that is a hijack and the threat to the environment and, more importantly, to the lives of people on the ship is something the state can’t tolerate.”

In a statement, Navios tanker management, operator of the crude oil tanker, thanked the UK authorities for their “timely and professional response”.