- The NYSC orientation camp in Kubwa community, Abuja has been invaded by looters and suspected thugs

Suspected hoodlums on Tuesday, October 27, stormed into the orientation camp of the National Youth Corps (NYSC) in Kubwa, carting away mattresses and other valuable assets.

The development plunged the community into unrest as gunshots rented the air with soldiers trying to safeguard the facilities from the looters.

An eyewitness claimed that the hoodlums, armed with dangerous weapons including knives and other sharp objects, descended on the community and mounted roadblocks.

Motorists were sent back by the thugs who took away mattresses and other materials meant for corps members.

Violence erupts in Ebonyi as hoodlums, police engage in gun duel after burning of Abakaliki station 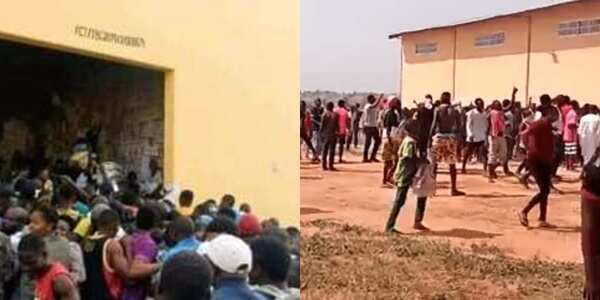 The NYSC orientation camp in Kubwa community of Abuja has been attacked by looters and suspected thugs. Credit: Vanguard
Source: UGC

Some residents in the neighbourhood were also said to have joined the looters to steal from the orientation camp.

It would be recalled that the nation has been engulfed in heightened unrest as a result of the demonstration against the brutality of the police nationwide.

Although the controversial police unit, Special Anti-Robbery Squad (SARS) which sparked the outrage has been disbanded, Nigerian youths are still adamant on total reform on the police system.

On Wednesday, October 21, the protest descended into anarchy as protesters stormed the streets following the alleged shooting of demonstrators at the Lekki toll gate Lagos.

The anger degenerated into looting and wanton destruction of properties by suspected hoodlums who also are using the avenue to loot some warehouses, shops and store belonging to the government and private individuals. 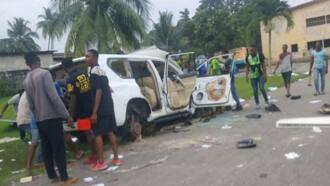 Earlier, Legit.ng reported that at least, three women were reportedly trampled to death as looters massively invaded a COVID-19 warehouse in the Federal Capital Territory(FCT) Abuja.

The looters on Monday, October 26, invaded the warehouse located in the Gwagwalada area council which is said to be owned by the agricultural and rural development secretariat of the FCT administration.

Bags of rice and other grains were carted away by the thugs who climbed fences and broke the roofs of the warehouse in order to forcefully gain access.