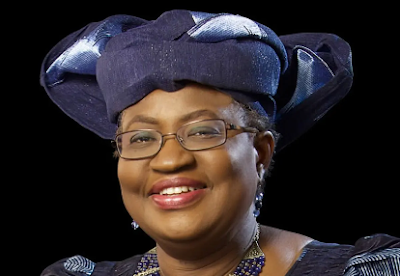 Media Mogul, Dele Momodu, and Reno Omokri, a former aide to ex-President Goodluck Jonathan, have reacted to the emergence of Ngozi Okonjo-Iweala, as the Director-General of the World Trade Organization, WTO.

It was earlier reported that Iweala emerged winner of the highly competitive race after polling 104 votes from 164 member countries to defeat her opponent, South Korea’s trade minister, Yoo Myung-hee.

With the development, Iweala has become the first female and first African to occupy the office.

Recall that the former Minister of Finance had received support from 79 countries.

Speaking during a virtual press conference last Friday, she said the 55-man African Union (AU) officially endorsed her over her only opponent, Yoo Myung-hee of South Korea.

Reacting, Dele Momodu, in a tweet via his Twitter handle on Wednesday, described Okonjo-Iweala’s appointment as an ‘excellent choice’.

“Wow! Excellent choice. Congratulations to her and to Nigeria and our great people!!!!!

On his part, Omokri said nobody else could have deserved the appointment better than Okonjo-Iweala.

Omokri tweeted: “Today is one of my happiest days. My dear friend, @NOIweala, made it.

“The first woman and African to head the @WTO as DG.

“To God, be the glory. Nobody could have deserved this better.

“Absolutely no one. Congratulations to you, Dr Ikemba, your children, and to Nigeria and Africa!