Mesut Ozil is not letting his current situation at Arsenal get the better of him as he joked about his ambitions to play alongside Francesco Totti at Roma, Daily Star.

Reports have been making the rounds about a potential move for the German midfielder to the Serie A outfit. 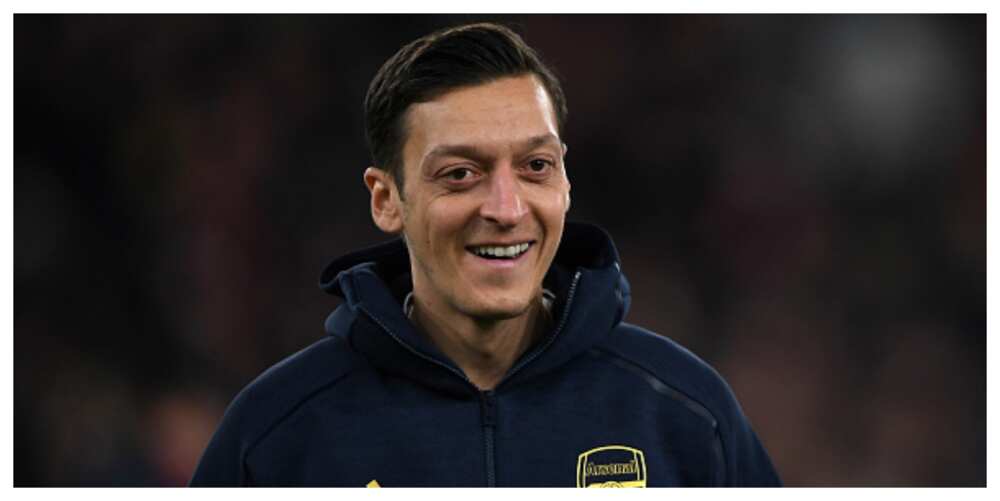 Mesut Ozil jokingly tells Roma he will like to play alongside Totti. Photo by Harriet Lander
Source: Getty Images

The out-of-favor star has been frozen out of the Gunners by Mikel Arteta after exempting him from the 25-man squad that will execute this season's Premier League campaign.

But Ozil has vowed to continue to fight for a place in the team and is determined to make a dramatic comeback into the starting XI in his final season at the Emirates.

The 32-year-old could consider a move away from the north London club during the January window.

"Grazie Roma - I think Totti and me could make a great duo."

Meanwhile, Legit.ng had earlier reported that Mesut Ozil has fallen down the pecking order at Arsenal football club and former player Lauren has blamed the German star for his current debacle.

Gunners boss Mikel Arteta has left the player out of the Premier League squad as well as the team that will play this season’s Europa League.

The last time the German star made an appearance for Arsenal was before the lockdown in March - and now his future at the club looks bleak despite him earning £350,000 per week in north London.

Legit.ng had also reported that Mesut Ozil has backed the move to combat child poverty as he donates an impressive 1,400 meals a day to 11 North London schools, SunSport reports.

The emergence of the coronavirus pandemic has left a huge number of families stranded - and now the German star is helping his community in the UK.

Following the footsteps of Manchester United’s Marcus Rashford who is helping schoolchildren with free meals, Ozil has also started with schools.