Karim Benzema was caught on camera speaking to his fellow countryman Ferland Mendy that he will not pass to Real Madrid teammate Vinicius Junior, Sport Bible.

Los Blancos played out a 2-2 draw with Borussia Moenchengladbach to earn their first point in this season's Champions League.

The video clip that showed Benzema discussing with Mendy not to pass to the youngster during the second period has now gone viral.

Benzema reportedly told Mendy "I swear on my mother, he's playing against us," while Los Blancos were 2-0 down. 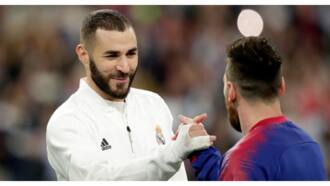 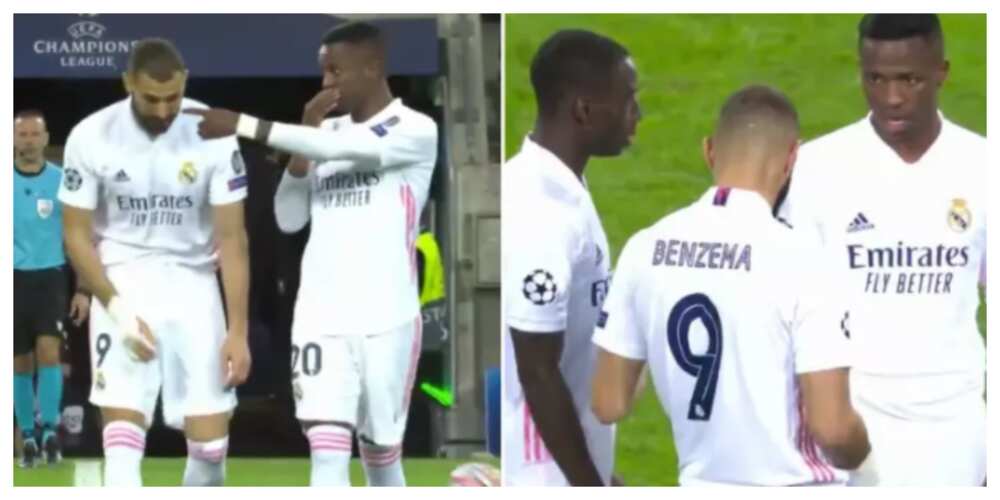 Karim Benzema was spotted telling Mendy he will not pass to Vinicius.
Source: UGC

According to Opta stats, the French striker did not make a single pass to the Brazilian teenager in the second half but completed three passes in the first period.

However, a new video clip revealed that Benzema was talking with Vinicius as they walked out of the tunnel into the pitch.

Then Mendy joined the pair in the conversation with their mouths covered with the possibility of mediating their disagreement.

Benzema scored one of the goals that brought Zinedine Zidane's side back into the match in the 89th minute before Casimero completed the comeback at the death.

But fans have expressed dissatisfaction with Benzema's words to Vinicius after the Frenchman adjudged Brazilian to have been wasteful in the first half.

The 32-year-old is regarded as one of the senior players in Madrid's dressing room after Sergio Ramos and Marcelo.

His goal against Moenchengladbach made him the second player in Champions League history after Lionel Messi to score in 16 consecutive seasons. Meanwhile, Legit.ng had earlier reported that Karim Benzema has equalled Lionel Messi's record in the Champions League following his strike against Borussia Moenchengladbach.

Real Madrid were 0-2 down in the match against the Bundesliga club and it all seems to end in a defeat for Zinedine Zidane's men.

Lilian Thuram scored a fantastic goal in the first half and capitalised on a rebound spilt by Thibaut Courtois in the second.