- Private and public schools in Lagos state have been asked to reopen from Monday, November 2

- The Lagos state government gave the directive on Thursday, October 29

Lagos state government has ordered the reopening of all private and public schools from Monday, November 2.

Folasade Adefisayo, the commissioner for education made the announcement in a statement on Thursday, October 29.

Adefisayo in the statement was titled, ‘LASG approves reopening of schools from Monday’ said boarders in public schools are to resume on Sunday, November 1. The statement reads in part:

“The Lagos State Government has approved the re-opening of schools for all classes in public and private schools across the State beginning from Monday, 2nd of November, 2020 while boarders in public schools are to resume on Sunday, 1st of the same month. 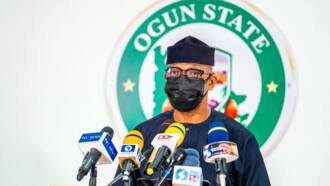 “We pray and hope that there will be no more disruptions in the academic calendar. However, the State Government will always regard the safety of pupils/students, parents and all staff as a matter of priority.”

The commissioner also advised pupils/students to take their studies more seriously to recover the lost period.

Recall that the Lagos state government directed all pupils and students in public and private schools to stay at home following the tension generated by the #EndSARS protests.

The state commissioner for education who issued the directive, said the safety of the pupils/students, parents, and all staff working in schools was paramount “at this critical period.”

She, however, advised parents to keep an eye on their wards and not allow them to be used as willing tools in the hands of those who might want to hijack the protests to unleash mayhem on the society.

Grammys may no longer matter – Drake reacts to exemption of The Weeknd, others

Popular Rapper, Drake has said the Grammys are losing their relevance following this year’s nominations. Drake disclosed that he was among many music fans who expected

President of African Development Bank (AfDB), Akinwunmi Adesina has backed former Nigeria Head of State, Yakubu Gowon, refuting the claims that he ”looted half of

A petrol tanker said to be carrying about 33,000 litres of petrol has crashed into an electricity transformer in Anambra State, causing fire to gut