‘Grabbing buttocks is blasphemy’ — El-Rufai's son, Bashir under fire over his pre-wedding photos 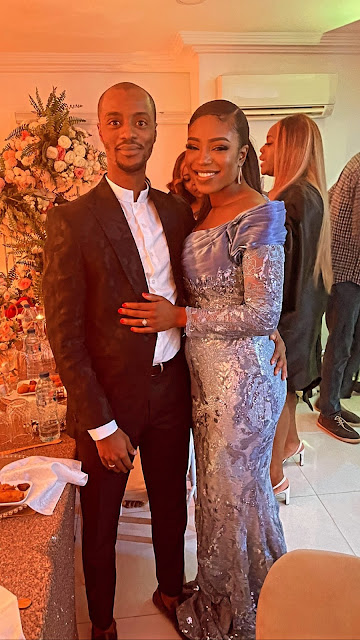 Bashir el-Rufai, son to Kaduna state governor, has come under intense criticism on social media after he shared photos of his pre-wedding moments with Halima Nwakaego Kazaure, his fiancée.

On Tuesday, Bashir had shared two loved-up photos of himself and Halima on Twitter.

In one of the pictures, he appeared to have placed his left hand on the backside of his wife-to-be, while the second showed him kissing her on the chick.

The post has since provoked criticism among a number of conservative Muslim users on the microblogging platform, some of whom quickly accused them of having committed haram — an act that is forbidden or proscribed by Islamic law — for being intimate before marriage.

“Why you dey grab woman yansh (buttocks)? This is blasphemy against our holy prophet,” one Twitter user opined.

“When @Rahma_sadau posted a picture, u were all shouting at her, but now no one is talking,” another user wrote.

The development comes weeks after Rahama Sadau, a Kannywood actress, was accused of stirring controversy and blasphemy after she shared photos on social media wherein she wore a backless dress which brought out her curves.

When will our people understand? This world is just temporary. You wouldn’t want your kids to be like her then why marry her? If they don’t follow your religion you’re in serious trouble bt not with me with the one who Created You. Na fara yarda baban ka bayahude ne yanzu. Damn????????‍♂️

Even those castigating sadau and monitoring others are liking and congratulating.

We are hypocrites fa.

May Allah forgive our shortcomings

When @Rahma_sadau posted a picture, u were all shouting at her, but now no one is talking... Anyway happy married life.....

Why you dey grab woman yansh ? This is blasphemy against our holy prophet SAW

Hypocrisy is what keeps Twitter Nigeria going. Atiku’s son did worse every1 kept quiet. It is what it is.

Have U heard of Choice Theory? There is a bunch of axioms, but only two U really need to concern yourself with.
1. The only person’s behavior we can control is our own....

This nation and the people there in are the most confused generation ever! None of the scholars will talk on this, if it's a son of nobody that's where Verses and Chapters will Decend, I felt everybody's pain in the kwantiri????????????

It seems many people are not religious sensitive. They fail to understand that marriage is an act of ibadat. And in ibadat, u do things that r in accordance wit d teachings of d prophet. I'm actually cross seeing the pix! Bt Allah yasa mudace, amin.

Was the Hausa actress Saudau admonished in private? What is good for the goose should be good for gander.

People cannot just look at the couple and wish them well. They want to insert themselves into the spiritual realm of others. This is the seed of intolerance and extremism. Go to Jordan, Lebanon and Palestine, women are not judged by wearing a veil or hijab.

Expecting to have religiously educated child from this kind of Muslim couples is the highest self-deception, however that the kind of training he received at home, I have never seen his mum wearing a veil (hijab) even once, this is the result of not choosing your child a good mum

Good a thing Bashir is seeing what lack of education is doing to his people and the type of bigotry that has eaten deep into the fabrics of the north.
But what do I know? ????????‍♂️
Congratulations baba na, Allah shi sanya alheri. ????????

‘They are very stupid’ — Bashir flares as criticism over photos mount

Reacting to the criticism on Wednesday, Bashir asked his critics to let him know if there’s any way he can make them feel worse.

“If my pictures with my wife do not sit well with some & due to the various unsolicited opinions, I’d just like to use this opportunity to say that they are very stupid,” the husband-to-be tweeted.

If my pictures with my wife does not sit well with some & due to the various unsolicited opinions, I’d just like to use this opportunity to say that they are very stupid & if there’s any other way these pictures can make them feel worse than they already do, please let me know.

Lmao. Some still haven’t realized it’s not on everyone their false outrage works on.

“If there’s any other way these pictures can make them feel worse than they already do, please let me know. Lmao. Some still haven’t realized it’s not on everyone their false outrage works on.”

It is understood that the lovebirds will tie the knot on November 21.