Popular Links: Buhari Football EFCC Boko Haram Trending Nigerian Names Politics
Home | News | General | Boko Haram: No fresh attack on Zulum, security in Borno – Spokesman
From Room 306 To Room 206 – Here’s A Video Of A Lady Being Screwed Hard From The Back In A Hotel Room
Defection to APC: Umahi under fire for sacking Ebonyi officials 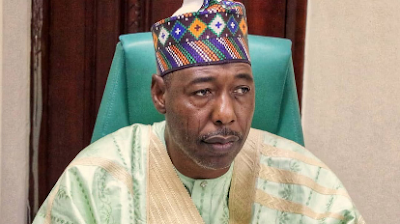 Borno State Government has refuted reports claiming there was another attack by Boko Haram on Governor Babagana Zulum and his security details.

Zulum’s spokesman, Isa Gusau, in a statement on Sunday, said Zulum travelled to Baga on Saturday, spent the day supervising the distribution of food items to 5,000 residents and returned to Maiduguri safely.

Gusau noted that while in Baga, his principal assessed major reconstruction and resettlement efforts with no hitch.

“As members of the public can testify, it is the culture and principle of Professor Zulum to say things as they are. In this case, it is what it is – no attack whatsoever. Any media organization that wants further clarification may wish to contact the Nigerian military.”

Gusau expressed Zulum’s appreciation to all well-wishers across Nigeria.

“He gratefully commended the Armed Forces, Police and civilian volunteers for the relentless efforts in fully restoring lasting peace to Borno State” the statement added.