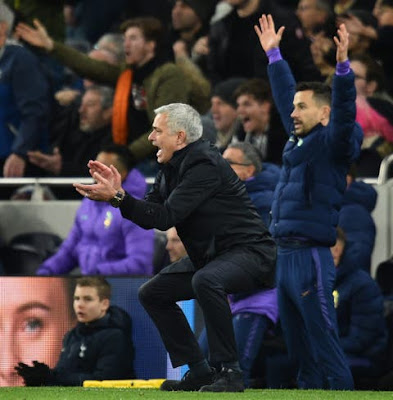 Jose Mourinho said his “amazing” Tottenham beat Manchester City on strategy as a vintage show from the Portuguese boss sent his side top of the Premier League.

Spurs were stubborn and clinical, defeating City 2-0 thanks to goal from Heung-Min Son and Giovani Lo Celso in either half, with Mourinho’s side registering just four shots on goal to City’s 22.

The result means Spurs finish a day top of the Premier League table for the first time since August 2014, and Mourinho put the victory down to a superior strategy over his old enemy Pep Guardiola.

He told Sky Sports, “For me, I prefer the players to speak because they are the ones, they were fantastic, they gave everything. They follow a strategy and football sometimes, more than ever, strategy plays an important part. They were amazing.

“It was very important to respect [City] and not to forget the team they are. If we follow people speaking about them as being not as good as before, if we follow the fake table because they have one match in hand, we would probably be playing in a different way. City is a fantastic team that lost against a team that strategically was very good but City is still City.

“Of course, you have to score and we didn’t have many chances. You need a top goalkeeper to make crucial saves in crucial moments, but we knew they would have more of the ball but we would be very comfortable playing that way because we knew the way to do it.”