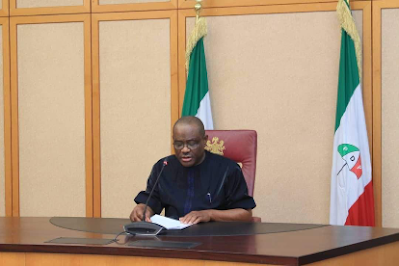 In a broadcast Sunday evening, Wike recalled that the administration repeatedly warned misguided youths that engaging in cultism is abhorrent anti-social behaviour.

He vowed that anyone who disturbs peace and security in Rivers neighbourhoods will be dealt with.

“As part of measures to tackle this menace, Government has imposed a 24-hour total curfew for two weeks on the entire area along and around the Okoro-nodu flyover up to one-kilometer radius from Saint Emmanuel Anglican Church, Rumuokoro, extending to the Rumuodomaya Slaughter and Local Government daily market with effect from Monday 23rd November 2020.

Wike stated that no form of trading, human or vehicular movement would be allowed within the mentioned restricted areas until further notice.

Only staff and vehicles belonging to Julius Berger Nigeria Limited are exempted from the curfew.

Wike directed security agencies to enforce strict compliance with the curfew, arrest and prosecute any person, trader or vehicle that violates.

The governor warned that community leaders allowing cultism and unrest to thrive in their domain would be treated as collaborators and punished.

He urged citizens to report suspicious cult acts, including gatherings and initiations in or around their neighbourhoods to law enforcement.