- Nonso said he misplaced the wallet on Friday, November 20, but the man who found it sent him a message so as to return it

A Nigerian man has been hailed on social media for displaying honesty after finding a wallet with a huge sum of money belonging to a bus passenger.

The passenger identified as Nonso Oguejiofor took to his Facebook page to narrate how he lost his wallet in a bus on his way home.

According to Nonso, he realised that his wallet was missing when he was about boarding a tricycle to his house after alighting from one of the buses he boarded earlier.

9ice: If I stay married to one woman, others will end up without husbands (video)

"I rushed back to the Bus Stop, the Bus was gone. It was a bad feeling cos I knew it wasn't a pick pocket but carelessness."

He said a man named Charles Chigbogwu used his neighbour's phone to send him a message informing him that he found his lost wallet. 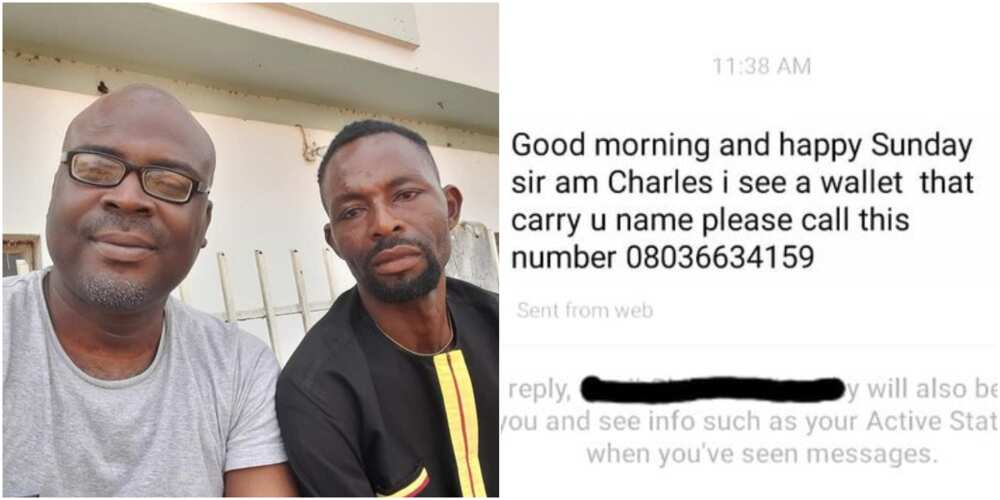 The Good Samaritan (right) rejected N10k reward after returning a wallet with a huge sum of money in it. Photo credit: Nonso Oguejiofor
Source: Facebook

"I called his number as requested, lo and behold he described everything in the wallet intact to the last N1 (mind you, there's a huge sum of money in it). I went to meet him, to my utmost surprise, He blatantly refused to take 10k I offered him, insisting that He did what He did for humanity sake and not for rewards.

"Guys, I'm still dumbfounded. We still have Angels in Human form in Nigeria?"

Actor RMD reacts hilariously after he was used for photo meme

He said he still has hope in Nigeria due to the experience.

In similar news, an honest South African man has been praised after going all-out to find the owner of a wallet he found in a parking lot.

Siphindile Lubisi took to social media to show appreciation to Mduu Semane Mandlazi who returned her wallet back with everything still inside, including money.

She narrated how Mduu told her that he saw the wallet on the ground in the parking lot where she had parked her car.