- A baby has been found by the roadside in Akure, the Ondo state capital, after he was abandoned by his mother

- According to the young man, the baby was found on Akinjo street in Okeijebu

A cute baby boy abandoned by his mother has been found by the roadside in Akure, the Ondo state capital.

Twitter user identified as Oluyemi Fasipe took the social media platform to make the disclosure, saying the baby was found on Akinjo street in Okeijebu.

He shared a photo of the baby and wrote:

"This little cutie was found abandoned on the roadside, the baby was found on Akinjo Street, Okeijebu in Akure. How can you give birth to a beautiful baby like this and throw her away? We live in a cruel world." 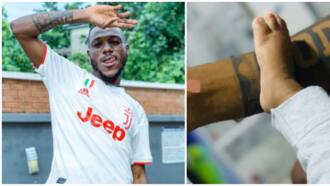 Oluyemi, however, gave an update that the baby is not a girl as he earlier claimed, saying he finally saw him and that he has been taken to the hospital.

"I finally saw the abandoned baby, a boy. He has been taken to the mother and child hospital in Akure for a medical test, the baby will be in the custody of a private orphanage in Akure. It feels good to know that he will be fine."