Just in: Yakubu Gowon reacts as British lawmaker accused him of looting 'half of CBN'

- The former military head of state denied the allegation, described it as "rubbish" and untrue

- Tom Tugendhat, a British lawmaker, had made the allegation when he and his colleagues were debating a petition regarding the #EndSARS protest

Nigeria's former military Head of State, General Yakubu Gowon (rtd), has reacted to the allegation that he stole half of the country's central bank when he moved to the United Kingdom on exile after his overthrow in July 1975.

Tom Tugendhat, a member of the British parliament, made the allegation on Monday, November 23, when British lawmakers debated a petition calling for sanctions against Nigeran government officials allegedly involved in human rights abuses amid the #EndSARS protests. 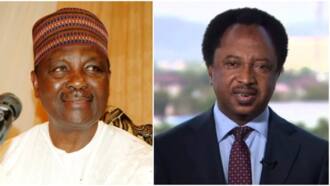 Gowon, in his reaction, however, described the British lawmaker's allegation as "rubbish", according to a report by BBC News Pidgin. The former head of state said he served Nigeria diligently and the record is there for everyone to see.

He added that he did not know who sponsored the lawmaker to make such allegation against him.

The former Nigerian leader added that he would not want to speak further on the issue as those who know him well understand that the allegation is not true.

Gowon ruled Nigeria from 1966 to 1975. He was overthrown while away at Kampala, Uganda attending a summit of the Organisation of African Unity.

It was from there he moved to England to become a student at Warwick University where he studied Political science and International relations. Fact-Check: Did Gowon steal "half of CBN" as British lawmaker Tugendhat claimed?

"Gowon exited power without any evidence of wealth & that remains, for over four decades after power."

Top 5 the Richest People of Nigeria: The Luxury of Corruption | Legit TV