- The chief of army staff, Lt Gen Tukur Buratai said terrorists are taking advantage of the bad roads to carry out attacks

- Buratai metioned the roads that are in need of rehabilitation

The chief of army staff, Lt Gen Tukur Buratai, has said the fight against the Boko Haram insurgency is facing a setback due to the poor state of some roads in the northeast.

According to The Guardian, the army chief said the bad roads are hampering the efforts of the military to respond swiftly to attacks by insurgents, bandits and other criminals. 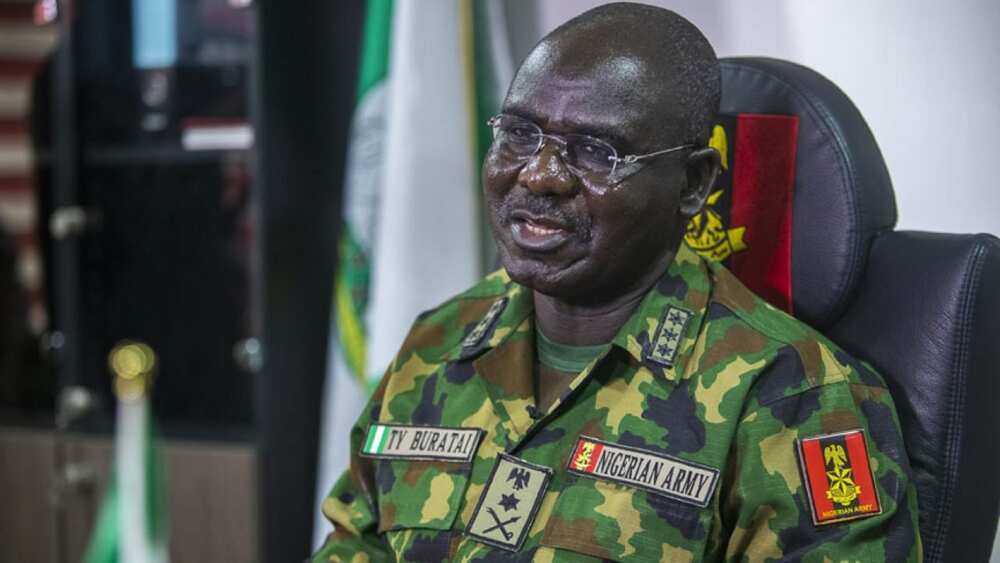 Buratai and other security chiefs have faced criticism over insecurity in the country. Photo:@obikoyaemmanue1
Source: Twitter

“Let me use this opportunity to express how bad roads in areas of military operations are affecting our quick responses to terrorists’ attacks and ambushes.” Meanwhile, the 2020 report released by the Global Terrorism Index (GTI) says Nigeria has retained its position as the third most impacted country in the world by terrorism.

Following the rise in the number of casualties from Boko Haram attacks in the north-east, Nigeria falls behind Afghanistan and Iraq.

The recent report also stated from 2018 to 2019 the number of deaths credited to Boko Haram increased by 25%. Nigeria is the second to record a fall in violent terrorism deaths globally after Afghanistan in 2019.

In another report, the Sultan of Sokoto, Alhaji Sa’ad Abubakar lll, has condemned the incessant abductions and killings by bandits in northern Nigeria.

Alhaji Abubakar, who is the leader of Nigerian Muslims by virtue of his position as the president-general of the Jamaatu Nasril Islam, made the comment on Thursday, November 26 at the 4th quarter 2020 meeting of the Nigeria Inter-Religious Council in Abuja

According to him, the bandits are so daring that they now go into houses to kidnap people.