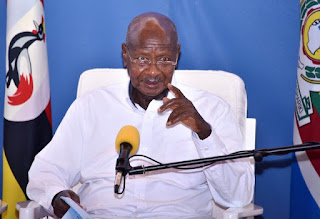 Longtime Ugandan leader Yoweri Museveni, who on Saturday won a sixth term as president with 60 percent of the vote, is being propped in office with billions of dollar aid pouring from the United States and other Western nations.

But the bulk of the money comes from the U.S. and not even Donald Trump has tried to stop the flow.

“The international donors, and particularly the United States, are the biggest enablers of Museveni’s authoritarianism,” said Godber Pumushabe, a Ugandan lawyer and activist.

“They underwrite all of Uganda’s public services — health, infrastructure, etcetera — which allows Museveni to spend massively on a security apparatus and a network of patronage.”

That security apparatus was on full display on Friday at the home of Museveni’s main challenger, 38-year-old singer-turn-politician Robert Kyagulanyi, better known by his stage name Bobi Wine.

Uganda’s election shapes up as a contest of young vs. old

Wine received a third of the vote from the official tally, but struggled to appeal to his supporters to either accept or reject the results because of a nationwide Internet shutdown since late Wednesday.

Dozens of heavily armed soldiers surrounded his residence, leaving him effectively under house arrest. They beat a security guard, and pointed their weapons at Wine’s wife.

Speaking to reporters in his yard, Wine said his phone was blocked from making calls and that he had sent his children out of the country “to avoid them witnessing this humiliation.”

He, too, called out Western donors for what he called complicity in Museveni’s crackdowns, which included the killings of dozens of his supports in November.

“Among the many moves we intend to do is to call upon Uganda’s development partners not to continue acting in a way that makes them appear as partners in crimes with Gen. Museveni,” he said.

The United States government was on track to match its nearly $1 billion disbursement to Uganda in 2020. Most of the money went toward health programs and training and equipping Uganda’s military.

“We’re working with the government, but we’re not just handing over blanks checks to them,” said a senior State Department officials in Uganda, who spoke on the condition of anonymity to discuss policy issues.

“It’s a difficult balance. Our assistance has real impact on the health and welling of Ugandans, but we are profoundly disappointed that we’ve seen a heavy-handed response and shrinking of the political space.”

Now, in addition to deploying peacekeepers around the world, Uganda supplies the largest contingent to a crucial battle-ready mission to Somali, where the United States has invested billions in propping up a weak government and fighting al-Shabab, an al-Qaeda-linked group that controls much of the countryside.

Uganda also has hundreds of thousands of refugees. But Museveni’s critics point out that many are fleeing conflict that has stoked — and benefited from — in neighbouring South Sudan and eastern Congo.

When U.S. Ambassador Matalie Brown released a statement saying that her embassy was canceling its observer mission for the election, due to Uganda’s denial of accreditation to most of the team, government spokesman Ofwono Opondo called her “arrogant.”

“Foreigners may be friends but our primary duty as govt is to Ugandan citizens,” Opondo’s tweet continued. “Your planned interference are well-known.

Incoming president Joe Biden will lead the seventh U.S. administration Museveni had dealt with in his four decades in power.

Biden has tapped a longtime critic of Museveni, Samantha Power, a former ambassador to the United Nations, to lead the U.S. foreign aid agency.

Democrat leaders in the Senate, including Robert Menendez (D-N.J.), have also called for tying U.S. aid to Uganda more closely to respect to democratic values.

“An example of what we are expecting is a public commitment to work with the opposition in the spirit of national unity,” the State Department official said.

On Saturday, as final results were read out by the election commission, Wine’s house remained surrounded by dozens of heavily armed soldiers who prevented the media and members of Wine’s political party from entering the compound.