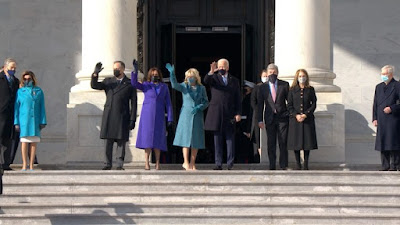 Joe Biden has arrived the Capitol for his inauguration as the 46th President of the United States.

He takes over from President Donald Trump, whose tenure elapsed today.

Biden and Kamala Harris arrived the Capitol at about 15:30 GMT for the inauguration.

Capitol Police office Eugene Goodman,who was applauded for leading rioters away from the Senate chamber during the attack on the Capitol earlier this month, escorted Kamala Harris into the building.

Donald Trump is not attending the inauguration and is already en route to Florida, but Pence previously announced he would be attending.

Chao resigned from her position in Trump’s cabinet after the Capitol riot.