Today, Wednesday, January 20, Joe Biden was officially sworn in as the 46th president of the United States of America in what many have described as a historic event.

According to CNN, the 78-year-old Democrat was sworn in outside the historic building by Chief Supreme Court Justice John Roberts. Harris will be making history as the first female, first Black, and first South Asian vice president as she takes the oath of office in a scaled-back ceremony.

Biden and his vice, Harris both arrived at the US Capitol building with their spouses, Dr. Jill Biden and Douglas Emhoff at the West Front of the building.

The historic inauguration that is being held in the midst of the raging COVID-19 pandemic will not be witnessed by the usual large gathering of the crowd. Joe Biden, Kamala Harris along with their spouses arrive at the West Front of the US Capitol for the inauguration. Photo credit: Joe Raedle
Source: Getty Images

It was also gathered that the Presidential Inaugural Committee and local law enforcement officials have urged Americans not to travel to Washington DC for the swearing-in.

This development is coming after President Trump finally departed the White House for the last time.

He left for Joint Base Andrews, for a short farewell ceremony before one last presidential flight to Palm Beach.

The soon to be former president thanked reporters at the White House and said it had been the 'honor of a lifetime' to serve as president.

Meanwhile, Legit.ng reported that the incoming United States president visited the Lincoln Memorial's reflecting pool that has 400 lights in honour of 400,000 Americans whose lives were cut short by COVID-19. 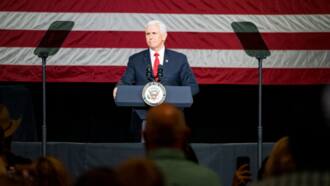 Biden, alongside his wife, Jill were said to have been at the sobering spot where a solemn song (Hallelujah) was being sung by Yolanda Adams.

Also present at the grand venue was Biden's vice, Harris, and her husband.