Our enemies are criminals, not Hausa, Fulani – Gov Makinde reacts to Igboho’s ultimatum 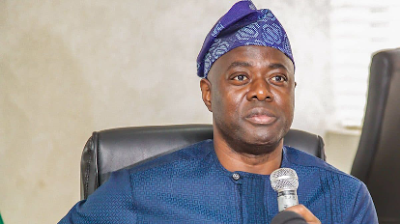 In a statement by his spokesman, Taiwo Adisa, Makinde said hoodlums, bandits and kidnappers are criminals, not the Hausa or Fulani.

He urged residents to come together and put the interest of Oyo first in the fight against insecurity.

A Yoruba activist, Sunday Igboho, had ordered the Fulani to leave Igangan by Friday.

Igboho blamed them for incessant murders and abductions in Oyo.

In his response, Makinde vowed to punish anyone disrupting the peace of the state.

Makinde told individuals or groups planning to take actions that would lead to the forcible removal of anyone to desist.

The governor appealed to residents not to take judgement into their hands, adding that there are bodies constitutionally empowered to arrest and prosecute criminals.

He said the government cannot overlook the fact that there have indeed been instances that cause concern.

Makinde expressed concern that the fragile peace between the herdsmen and farmers in Oke Ogun is being threatened.

“Individuals who are not authorised are going around chasing people from their homes and causing mayhem. This assault on residents of Oyo State is not the way to further the Yoruba cause.

“Let me state that we shall not sit back and watch anyone make any law-abiding resident of Oyo State feel unsafe in their homes, farms, or business places.

“We are aware of some people circulating flyers and giving people ultimatums to leave their land. This is totally unacceptable and will not be condoned”, Makinde added.