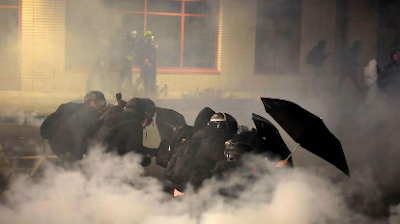 Protesters have vandalized the Democratic Party headquarters in Portland and Oregon and a federal US Immigration and Customs Enforcement building, CNN reports.

The CNN on Thursday quoted a police Sgt. Kevin Allen, a spokesperson for the Portland Police Bureau, as saying in a video statement that at least four demonstrations were planned in the city.

Allen explained that while two of the protests remained peaceful, the others resulted in “property damage.”

The police spokesman further explained that a group of about 150 people converged on the ICE building in the South Waterfront neighborhood Wednesday evening around 9 p.m.

He said that some of them were carrying pepper ball guns, fireworks, shields, rocks and “electronic control weapons similar to Tasers.”

Allen explained further that the gathering was declared unlawful by federal officials after protesters started throwing rocks and vandalizing the building, Allen said.

Allen said that police were in the surrounding neighborhood and “some arrests were made.”

A crowd of about 150 people were said to have gathered at Revolution Hall before marching to the Oregon state Democratic Party headquarters.

Portland Police added that officers on bicycles encountered the protesters in a parking lot at Revolution Hall, where “(d)ozens of people pressed in on the officers and then took one of the officers’ bicycles.”

The demonstrators then left Revolution Hall and marched to the Democratic Party headquarters, where they “smashed windows and vandalized the building,” Allen said.

At one point, the crowd “showed aggression by swarming officers and throwing objects,” Allen said.

Another showed the crowd making their way up the street, many of them clad in all black, carrying a sign that read, “We are ungovernable.”

CNN reports the demonstration was billed as a protest against Joe Biden and law enforcement, while supporting the rights of indigenous people.

Democratic Party in the State of Oregon have reacted to the incident in a statement, saying that none of its staff were in the building at the time, adding that they are “frustrated and disappointed.”

“This is not the first time our building has been vandalized during the past year — none of the prior incidents have deterred us from our important work to elect Democrats up and down the ballot, and this one will be no different,” the statement said.

Joe Biden was sworn in on Wednesday as the 46th President of America.

Before the swearing in ceremony on Wednesday, there was a deadly attack on the US Capitol leading to the death of some citizens.

Former President Donald Trump was accused of having incited his supporters to carry out the attack as a final push to stop the certification of Joe Biden as the winner of the November 3 presidential election. He was impeached a week later.