Appoint Bishop Kukah as minister, give him 6 portfolios if you want – Muslim group tells FG 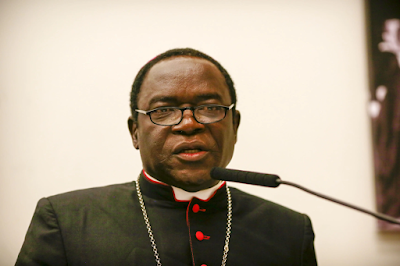 Muslim Rights Concern (MURIC) has said the Federal Government was free to appoint Bishop Matthew Kukah as a minister but never again as a mediator.

MURIC disclosed this while stressing that the National Peace Committee (NPC) as Kukah’s initiative has lost credibility among Nigerians.

The group statement came on the heels of an earlier declaration by the Christian Association of Nigeria (CAN) that NPC is a personal initiative of Kukah.

MURIC’s statement was signed by its director, Professor Ishaq Akintola and made available to newsmen on Friday.

“The fact that the author of the ‘initiative’ is hidden from the public in its website here shows lack of transparency and possession of a hidden agenda,” the group’s statement said.

MURIC noted that NPC has 10 Christians and five Muslims only and nine Southerners as against 6 Northerners only as members, wondering how a man like Kukah, who, according to them, always complains about marginalization and nepotism cannot even raise a 15-member committee without falling foul of his own allegations.

“Bishop Kukah turned a personal initiative to ‘national’ and Nigerians fell for it.

“What is national about (NPC)? Is it the ratio 10:5 Christian-Muslim membership or the 9:6 Southern-Northern margin?

“It is our humble opinion that a Muslim hater like Kukah should not be allowed to sit in judgement or in mediation on issues affecting Muslims or matters affecting the North.

“FG is free to appoint him as a minister and give him six portfolios at a time if it so desires but never again as a mediator.

“Appoint him to any federal post but not to committees and councils that will mediate between the North and the South or between Christians and Muslims.”