The federal government has stated that Boko Haram terrorists deliberately refused to release Leah Sharibu in order to divide Nigerians along the lines of religion.

Leah Sharibu, a Christian, was among 110 female students of the Government Science Secondary School, Dapchi in Yobe state abducted by Boko Haram in 2018. 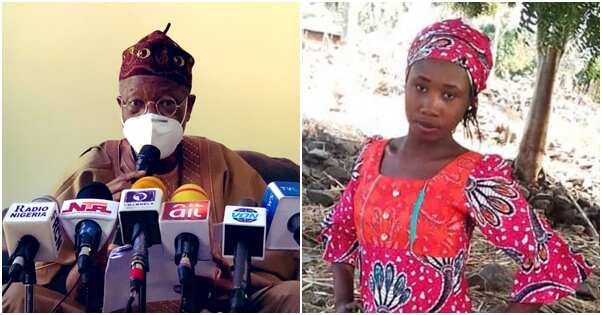 Her case, in particular, attracted unprecedented local and global attention, owing to the fact that others were released, while she was detained for reportedly refusing to renounce her Christian faith.

However, Lai Mohammed, Nigeria’s minister of information and culture told Channels TV that the terrorists know that holding Sharibu captive might cause religious tensions in the country.

The minister assured Nigerians that the federal government is making efforts through back channels to secure the release of the Dapchi schoolgirl.

He urged Nigerians not to play into the hands of the terrorists by looking at security matters from the standpoint of religion or ethnicity.

''We must please be careful and more responsible in the way we look at issues. This is exactly what the terrorists want to do, set Muslims against Christians.''

Meanwhile, Enoch Adejare Adeboye, founder and the general overseer of the Redeem Christians Church of God (RCCG), has called for the release of Leah Sharibu.

In a press release on Friday, February 19, the popular Christian cleric said the churches will not relent in their effort to seek the release of Sharibu.

Adeboye's calls for Sharibu's release came barely 48 hours after students were kidnapped at the Government Science College in Kagara, Niger state. Efforts are ongoing to rescue them. In another news, a presidential media aide, Garba Shehu, has sent a tongue-lash as a reply to Reno Omokri over Nigeria's security situation.

Both prominent Nigerians have given each other an earful on the whereabout of Leah Sharibu, a captive of Boko Haram insurgents.

Omokri, who was an aide to a former Nigerian president, Goodluck Ebele Jonathan, has challenged Shehu to spend a night in some northern regions (Koshobe Kware) without security and get a reward of $20000.

In reply, Shehu told Omokri that he does not want to be a part of the money if it is what was collected in the name of Sharibu.