Nigerian governor discloses those responsible for Okorocha’s arrest and detention

- Hope Uzodinma, the Imo state governor, has spoken about the circumstances that led to the arrest and detention of Senator Rochas Okorocha

- The governor faults the claim that he is persecuting Okorocha

- Uzodinma disclosed details about the meeting he had with President Buhari

The Imo state governor, Hope Uzodinma, has said he is not behind the recent arrest and detention of Senator Rochas Okorocha.

Uzodinma said the recent arrest of the former governor was connected to investigations that were commenced by the past administration of Emeka Ihedioha. 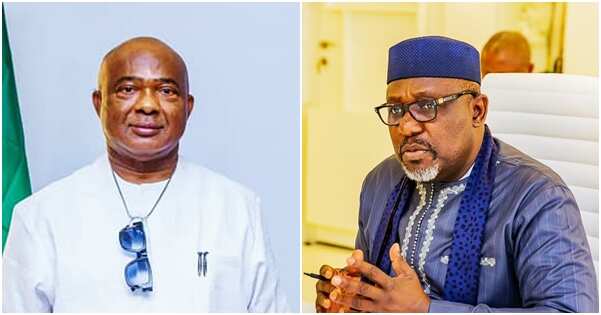 The Imo state governor made the statement on Tuesday, February 23, when he addressed the press during his visit to President Buhari.

Uzodinma stated that a judicial panel of inquiry found Okorocha culpable for allegedly converting government lands for personal use.

Why we invited soldiers to Orlu, Governor Uzodimma breaks silence after meeting Buhari

The governor said the travails faced by the senator were a result of the implementations of the investigative panel.

He said the Imo state government sealed the properties of Okorocha following the recommendations of the panel.

Uzodinma stated the senator could approach the court if he feels his properties were sealed.

The governor also disclosed that he visited the presidential villa to brief Buhari about the military operation in Orlu area of the state.

Meanwhile, the police have issued a statement concerning the arrest of Okorocha for trying to unseal the Royal Palm Estate which was sealed by the state government.

The Imo state police command on Monday, February 22, said it would not hesitate to charge Senator Okorocha to court if investigations reveal that he committed an offence on Sunday, February 21. 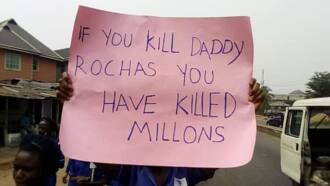 In another news, some students have reportedly protested the recent troubles of former governor Rochas Okorocha, the senator representing Imo West senatorial district.

The students are beneficiaries from 12 schools built by Rochas Foundation in Sokoto, Bauchi, Jos, Ogboko, Zaria, Ibadan and other communities where they enjoy free education, scholarship programs and empowerment. The protest was to demand the safety of their benefactor.

The students said in helping them, the former governor did not take their background into consideration, and rendered the help selflessly, thereby creating an assured future for Nigerian children, Leadership reported.